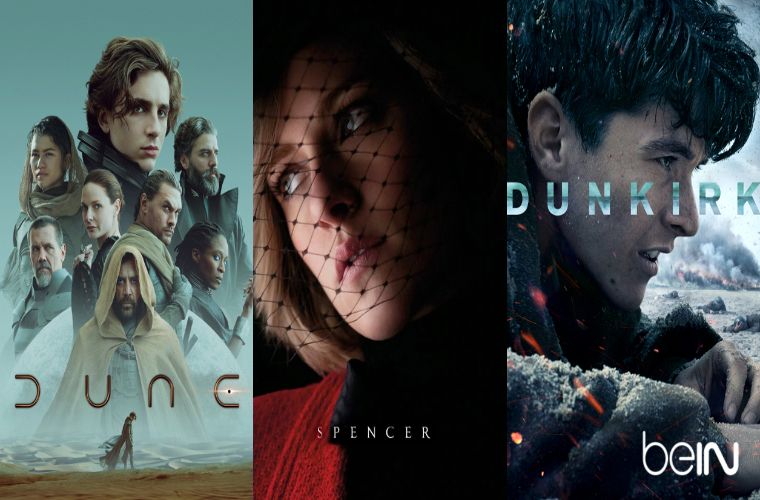 Bring the Oscars Home with beIN

Doha, Qatar - March 24, 2022 – Get in the mood for the Oscars before and after you watch your favourite movies and their film crews receive the ultimate cinematic recognition on stage. This March, beIN MEDIA GROUP (“beIN”), the global sports and entertainment broadcaster, is bringing you a curated selection of Oscar-nominated hits as you prepare for the 94th Academy Awards ceremony this Monday, 28 March.

If you are a fan of historical action movies, beIN has you covered. Director Christopher Nolan’s Dunkirk, the World War II epic which received 34 major nominations and eight awards in 2018, will play on Friday, 25 March at 22:00 MECCA on beIN MOVIES 2. Visually and emotionally intense, the movie talks about soldiers from the British Empire, Belgium, and France who try to evacuate from the town of Dunkirk during an arduous battle with German forces.

If you appreciate the work of Sir. Anthony Hopkins, stay tuned for the drama movie The Father, which will be broadcast on beIN MOVIES 3 on Friday, 25 March at 23:30 MECCA. Starring Olivia Colman and Rufus Sewell, the movie talks about a man who refuses all assistance from his daughter as he ages and begins to doubt his loved ones.

If you have followed the Tate murders of 1969 for any length of time, Quentin Tarantino brings the incidents to life in Once Upon a Time in Hollywood with the perspectives of washed-up actors trying to navigate a rapidly changing film industry. Watch the craziness that unfolds on beIN MOVIES 1 on Thursday, 31 March, at 21:00 MECCA, but get ready for a lot of awkward laughter and unconventional storytelling typical of Tarantino’s style.

Also, on Thursday, 31 March, beIN MOVIES 3 will broadcast Ben Affleck’s Argo at 21:30 MECCA. The movie portrays the 1979 hostage crisis and how an exfiltration specialist masqueraded as a Hollywood producer in order to rescue six Americans who were held captive in Iran.

On beIN’s popular on-demand platform, you’ll have the option to either rent or buy all of your favourite Oscar-nominated movies, including the epic science fiction film Dune, starring Jason Momoa, Zendaya, and Timothée Chalamet. Another exciting movie you can access on beIN ON DEMAND is the sports/drama film King Richard. Starring Will Smith, the film talks about the story of both legendary female tennis players Venus and Serena Williams.

Also on beIN ON DEMAND is the historical fiction psychological drama film Spencer. Directed by Pablo Larrain, the movie talks about the turbulent marriage between British Royals Princess Diana and Prince Charles.

Finally, on beIN’s list of recommendations are animated movies that will keep you motivated and entertained throughout the week.

On Friday, 25 March, starting from 22:30 MECCA on beIN MOVIES 4, the popular Pixar hit WALL-E will be broadcast. The movie showcases a small robot left to pick up garbage in the year 2805 when the Earth is left deserted and uninhabitable. In such gloomy circumstances, WALL-E is able to fall in love with another robot and travel with her across the galaxy, in a journey with interesting consequences for the fate of humankind.

On beIN ON DEMAND, fans of comedy and adventure can rent or buy the animated movie The Mitchells vs. the Machines. The movie shows a dysfunctional family who fight a robot apocalypse amidst their much-awaited road trip to save humanity.

For even more Oscar-nominated flicks on beIN, visit: https://www.bein.com/en/bein-choices