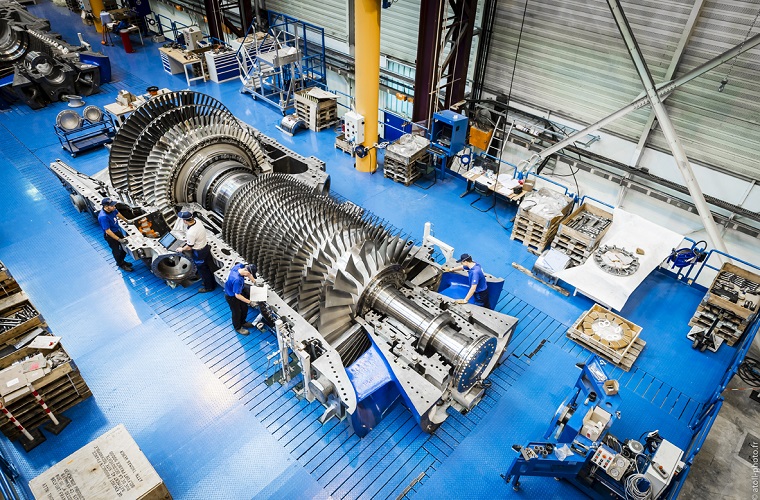 DECARBONIZATION: THE ROLE OF GAS IN MENA’S ENERGY FUTURE

The Middle East and North Africa’s (MENA’s) population is projected to continue to grow faster than the global average for the foreseeable future - from over 448 million in 2018 to more than 719 million in 2050. Some countries in the region, such as Iraq, are recovering from prolonged periods of conflict, while more mature economies like those in the Gulf Cooperation Council (GCC) are diversifying their industrial base.

“As they look to grow and develop further, governments across the region are exploring opportunities to strengthen public infrastructure and trying to balance the growing need for reliable power against climate change concerns and sustainability goals. Consequently, MENA’s energy landscape is undergoing a grand transformation,” said Joseph Anis, President & CEO of GE Gas Power Middle East, North Africa and South Asia. “Gas-based power generation is poised to serve a critical role in helping to reduce emissions and complement the growth of renewable energy with highly efficient, flexible, affordable, and reliable baseload power as this transformation plays out.”

GE and external analysts predict that as renewable energy becomes more affordable, it will be the fastest growing segment in MENA, and in the overall global energy mix. In the UAE, for example, the Energy Strategy 2050 targets an energy mix that includes 44 percent clean energy, while Kuwait has set the target to supply 15 percent of peak electricity demand from renewable energy sources by 2030. As little as a decade ago, such aggressive alternative energy targets from the world’s leading oil and gas producers would have been almost unimaginable.

It is understood that flexible thermal generation, however, will continue to play a critical but changing role, accounting for up to 60 percent of power generated globally through 2028. The most significant trend in global power generation is the projected decline in the use of coal, while gas continues to grow, expecting to account for over one-fifth of total power generated by 2028.

THE ROLE OF GAS IN DECARBONIZING THE ENERGY SECTOR

There are three core elements to a sustainable grid: cost, reliability, and environmental impact. Gas is expected to play a strong role in the future energy mix as it can help decarbonize the power sector at affordable costs, while providing access to uninterrupted, dependable power.

For example, GE’s HA gas turbine technology is now available at over 64 percent combined-cycle (CC) efficiency and is closing in on 65 percent– a feat once considered to be almost impossible. Gas power plant block sizes have gone from ~300 megawatts (MW) powered by F-class turbines to almost 850 MW and beyond. The financial impact of these changes has been significant, with capital expenditures (CAPEX) going down from ~$900 per kilowatt (kW) in 2010 to as low as $400 per kW today. Higher efficiency also means less fuel consumed and lower emissions per MW of power generated.

Switching from coal and oil-based power generation to a mix of gas and renewable energy offers a clear path to decarbonization without compromising the reliability of electricity supply. Renewable energy is typically intermittent in nature as sunshine, rain, and wind speeds vary over the course of a day, as well as across seasons. While that energy can be stored, battery storage solutions remain expensive, often making them economically infeasible when required at a large scale. It costs ~$200 to store one barrel of oil equivalent (BOE) of energy with battery storage solutions. Conversely, storing one barrel of oil or natural gas at scale is ~$1.

Additionally, electricity typically cannot be cost-effectively stored in large quantities for extended periods of time. For example, a battery with 1 MW of power capacity and 4 megawatt hours (MWh) of usable energy capacity will usually have a storage duration of four hours. This is another reason battery storage can be useful but is not as reliable and feasible as natural gas in complementing renewables. Stated another way, battery technology today and for the foreseeable future is economical in certain locations and only for short durations. It is natural gas complementing renewables then that provides truly reliable and cost-effective energy whenever needed - intra-day, and across days, weeks, and seasons.

GAS POWER TECHNOLOGIES THAT CAN SUPPORT A LOWER-CARBON FUTURE

Driving the era of gas forward are advanced solutions that can enhance the performance of existing energy infrastructure and technologies that can push the efficiency levels of new power generation facilities to unprecedented levels.

Upgrade solutions are available now that can increase the output, efficiency, flexibility, lifespan, and availability of gas turbines, while reducing fuel consumption and environmental impact. For example, in the UAE, GE’s MXL2 upgrade solution was implemented on two GE 13E2 gas turbines at ADNOC Refining’s Ruwais General Utilities Plant, increasing the total output of the turbines by up to 23 MW. Moreover, the upgrade solution will help deliver significant environmental benefits, preventing up to 18,000 tons of annual carbon dioxide emissions. In Egypt, GE’s Advanced Gas Path (AGP) upgrade solution was installed on four 9E gas turbines at the West Damietta Power Plant, leading to a total output increase of 18 MW at the facility - the equivalent electricity needed to power up to 15,000 Egyptian homes. Upgrades of existing assets can be a significant element of the decarbonization of the power sector. Many power plants continue to operate today in simple cycle mode at efficiencies below 30 percent, with high emissions of nitrogen oxides (NOx). There are technologies available today to bring these plants up to 50 percent combined cycle efficiency, leading to significant fuel savings and substantially decreasing carbon emissions.

New power plants can be set up with gas turbines that offer much higher levels of efficiency than ever before. For example, GE’s HA gas turbines have helped deliver two world records - one for powering the world’s most efficient combined cycle power plant, by achieving 63.08 percent gross efficiency at Chubu Electric Nishi-Nagoya Power Plant Block-1 in Japan and the second, for enabling EDF’s Bouchain Power Plant to achieve 62.22 percent net combined cycle efficiency in France. It is the world’s fastest growing fleet of heavy-duty gas turbines with more than 100 units ordered by over 40 customers in 18 countries.

This includes three units ordered by the Sharjah Electricity and Water Authority (SEWA) for an upcoming 1,800 MW independent combined cycle power project located in Hamriyah. Using three GE 9HA units in combined cycle operations can help SEWA reduce carbon dioxide emissions by up to 4 million tons per year, compared to current levels. Impressively enough, this is the equivalent of taking 1 million cars off the UAE’s roads. Capable of ramping up or down at up to 88 megawatts per minute while still meeting emissions requirements, the turbine can also support countries transition to a larger proportion of renewable power in their energy mix by helping to balance grid instability.

Today, we can also adapt gas turbines to burn clean resources such as hydrogen. GE has more than 75 gas turbines operating on high hydrogen and other related low heating value fuels, including blends of hydrogen and natural gas. These units have now accumulated over 6 million operating hours. GE’s B and E-class gas turbines also have the capability to operate on ~100 percent hydrogen with the installation of the appropriate combustion and accessory systems.

Hybrid technologies offer another means to address future energy needs. GE recently successfully integrated energy battery storage technology to black start a 7F gas turbine at Entergy Louisiana’s Perryville Power Station in the USA. The term ‘black start’ refers to the rebooting of an idle power plant without support from the grid in the event of a major system disruption or a system-wide blackout. To provide a black start, traditionally some power stations have small diesel generators — normally called black start diesel generator (BSDG) — which can be used to start larger generators, and in turn can be used to start the main power station generators. Today, the Perryville Power Station is supported by GE’s 7.4 MW battery-based energy storage system paired with the plant’s simple cycle gas turbine. The project demonstrates the complementary nature of gas-powered energy and battery storage. It also serves as a potential model for future projects in GE’s 7F fleet of more than 950 units, over 70 of which are installed in Saudi Arabia.

The engaging discussion and live Q&A session concluded that gas will remain a key part of MENA’s future energy mix, with GE Gas Power underlining its commitment to be a partner of growth as the region focuses on strengthening power infrastructure further with cleaner, dependable, and cost-effective options.