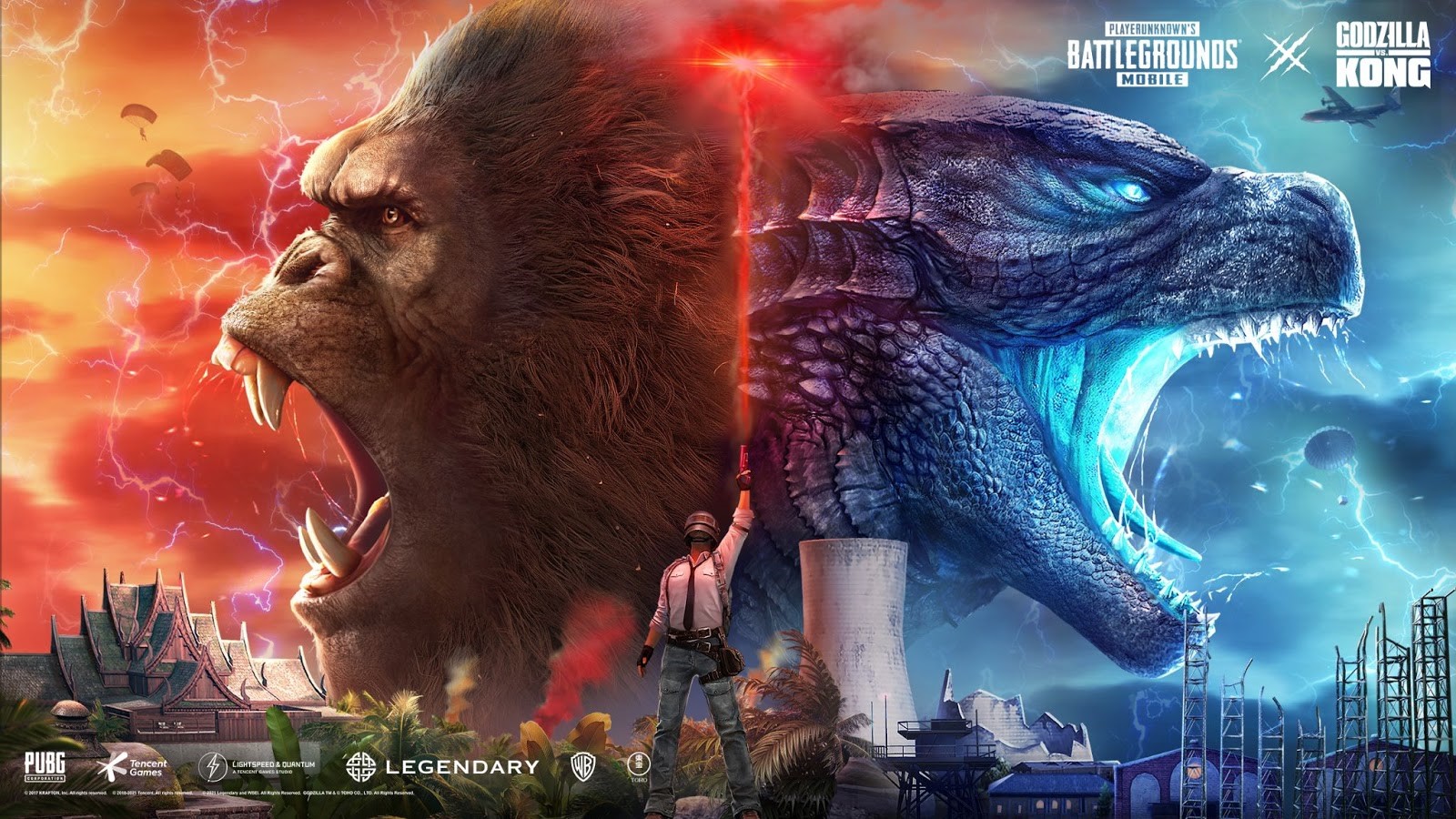 The new Version 1.4 update to the world’s most popular mobile game introduces Godzilla, Kong and Mechagodzilla to the game, alongside microcosm gameplay, a new vehicle and new arena map. Key features include:

New Arena Map: Hangar – A new map, set in the hangar of a giant unknown ship, will be playable beginning on June 1st. It will support three modes of Team Deathmatch, Arena Training and Team Gun Game. The map includes tight corners, cover, and will feature fast-paced firefights

Microcosm Gameplay – On June 9th players will be able to shrink themselves down to the size of an insect, teleporting and battling across the Erangel map

New Vehicle: CoupeRB – A two-seater sports car, the CoupeRB, is now available on Erangel, Miramar, Sanhok, and Livik with a top speed of more than 150km/h

The highly anticipated Version 1.4 update has arrived in PUBG MOBILE, introducing Titans as part of its Godzilla vs. Kong partnership, along with a number of significant changes. Beginning today, players will be able to encounter Titans including Godzilla, Kong and Mechagodzilla in-game as they explore various maps via designated routes while interacting with Apex Cybernetics and Monster Settlements. The battle on Erangel will take a new turn starting June 9th as players will now be able to shrink themselves down to the size of an insect and teleport throughout the map with the new microcosm gameplay. A new over the shoulder (OTS) aiming mode, new vehicle, and new arena map have also been added to further enhance the game. The PUBG MOBILE Version 1.4 update is available now for free via the App Store and Google Play Store, and you can see the reveal trailer here.

Mysterious Titans have begun to appear across the Erangel, Sanhok and Livik maps. Players can select the Titan Strikes mode at the beginning of each match. As the battle begins, these colossal creatures will move randomly across the map. While they are usually passive towards players, having too many players around can make them angry and hostile. Apex Cybernetics and Monster Settlements are two new elements that have been added to the game, both of which Titans will set out to destroy. Apex Cybernetics contain beneficial supplies that can be looted once destroyed by a Titan. Monster Settlements also have beneficial loot; however, players will have to defeat hostile monsters in order to acquire it.

While extremely dangerous, Titans also passively absorb energy and release it in the form of Titan Crystals. These crystals provide different special effects, such as a special throwable knockback and burn item, or a buff that enhances a player's abilities. The first Titan, Godzilla was released in PUBG MOBILE on May 11th in Erangel, with Kong entering Sanhok on May 15th and Mechagodzilla in Livik on May 20th. Players can also look forward to a unique event that will take place during the final stages of the Titan Invasion.

Version 1.4 also adds the new arena map, Hangar, which supports three modes including Team Deathmatch, Arena Training and Team Gun Game from June 1st. Set in the hangar of a giant, unknown ship far out in the open ocean, this map provides tight corners and plenty of cover in which quick reactions and accuracy will be rewarded. Hangar is sure to provide exciting, pulse-racing tension for those who enjoy fast-paced firefights.

On June 9th, the Version 1.4 update will introduce a series of strange Labs to the Erangel map, with each holding a mysterious Quantum Transformation Device. Players who interact with this device will experience the game in an entirely new way – they will be transformed into a miniature insect player. In this state, players can only fight other insect players with special weaponry and cannot be killed with normal weapons except pans. Miniature players can also exploit Wormholes to traverse Erangel, by travelling between laboratories.

Players will now also benefit from the new over the shoulder (OTS) aiming mode. The introduction of this new button will slow movement speed while increasing shooting accuracy. Used effectively, OTS mode will allow players to be more accurate in their long-range battles and gives more ways to win gunfights. This mode is customisable and can be turned on and off in the Basic Settings tab.

For those who prefer joyriding with friends to intense gunfights, the new CoupeRB provides a speedy and stylish way to get around. A two-seater sports car, the CoupeRB is one of the fastest vehicles in PUBG MOBILE with a top speed of more than 150km/h. The vehicle is available on Erangel, Miramar, Sanhok, and Livik.

Alongside these highlights, Version 1.4 includes a huge number of balancing changes to the game, both in weapons, game stability and anti-cheat detection.

ABOUT Godzilla vs. Kong

On March 31, 2021 from Warner Bros. Pictures and Legendary Pictures comes the long-awaited face-off showdown between two icons in the epic adventure Godzilla vs. Kong, starring Alexander Skarsgård, Millie Bobby Brown, Rebecca Hall, Brian Tyree Henry, Shun Oguri, Eiza González, Julian Dennison, with Kyle Chandler and Demián Bichir, under the direction of Adam Wingard, from a screenplay by Eric Pearson and Max Borenstein, story by Terry Rossio and Michael Dougherty & Zach Shields, based on the character “Godzilla” owned and created by TOHO CO., LTD.. Legends collide as these mythic adversaries meet in a spectacular battle for the ages, with the fate of the world hanging in the balance.  Kong and his protectors undertake a perilous journey to find his true home, and with them is Jia, a young, orphaned girl with whom he has formed a unique and powerful bond.  But they unexpectedly find themselves in the path of an enraged Godzilla, cutting a swath of destruction across the globe.  The epic clash between the two titans—instigated by unseen forces—is only the beginning of the mystery that lies deep within the core of the Earth. Warner Bros. Pictures and Legendary Pictures Present a Legendary Pictures Production, A Film By Adam Wingard, Godzilla vs. Kong.