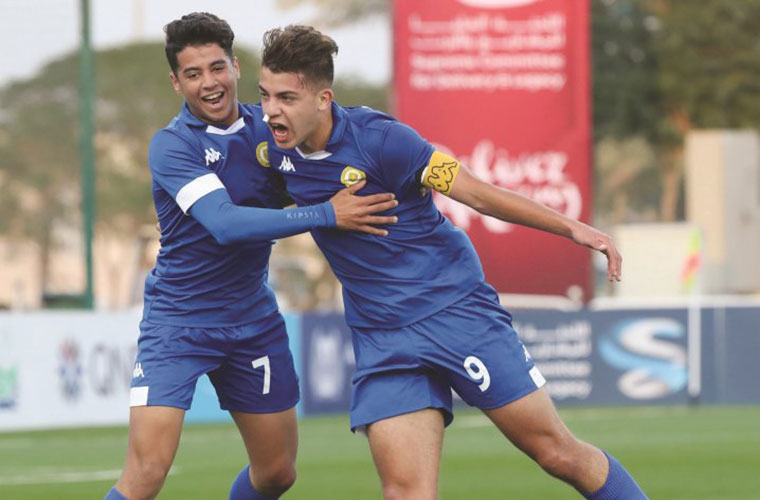 Skipper Omar Sadik was the three-goal hero as Mohammed VI Academy boosted their hopes of reaching the quarter-finals of the Al Kass International Cup with a convincing 3-0 victory over Turkish outfit Altinordu.

Powerful striker Sadik was outstanding throughout the 90 minutes for the Moroccans, who are making their debut at the tournament this year.

Mohammed VI Academy had given a good account of themselves in their opening match defeat by Italians Inter Milan, but they bounced back from that 3-1 reverse to totally dominate this match.

Mohammed VI Academy do not have a side playing in any adult leagues but focus on youngsters aged 12-21, with a focus on underprivileged youngsters from Moroccan capital Rabat.

They dominated from the start and Hassan Aqboub had the first shot on target but it was easily handled by Serhat Oztasdelen.

Aqboub was involved in much of Academy’s early play down the left and he drove in a cross towards Sadik but Oztasdelen came off his line to reach the ball before the striker.

Mohammed VI Academy were very much on top and they took a deserved lead on 20 minutes with a superb strike by Sadik. He tried to find Abdellah Baallal but the ball hit a defender and bounced up at a perfect height for Sadik to hit it first time on the half volley.

Yassine Khalifi then sent a shot wide as Mohammed turned on the pressure and the Moroccans felt Altinordu should have been down to 10 men when Mouad Dahak was pulled back by Mustafa Kocabas, who was the last man. The Altinordu skipper escaped with a yellow card.

Sadik’s free-kick hit the wall and another chance was gone, but Mohammed VI Academy  continued to press and Ilker Akar needed to produce a fine challenge to deny Aqboub.

Oztasdelen was again tested in the last 10 minutes of the first half as Dahak sent in a powerful drive from the corner of the penalty area. It was Mohammed VI Academy’s eighth shot of a first half that saw then enjoy 65% possession with Altinordu failing to test the keeper at all during the first half.

Academy continued their domination after the break and the Turks had no answer to the power of Sadik, who doubled the advantage on 55 minutes when turning Arda Kirgil and letting fly from the edge of the box.

Aqboub also tested the keeper as the Moroccans looked for further goals in the most dominant performance of the tournament to date.

It took Altinordu 71 minutes to have their first shot at goal when Hakan Ozturk curled his free-kick into the side netting after Ayoub El Hammami had brought down Seckin Firinci.

Sadic completed his treble with a dubious penalty on 84 minutes. Souhail Boudanane went down while challenging Melih Istar and a spot-kick was harshly awarded. The penalty may have been open to debate, there was no doubting Sadik deserved his hat-trick and he found the net with a minimum of fuss.

Last year there were three hat-tricks at Al Kass (Carles Moscardo for Real Madrid against Spartak Moscow, Chris McKee for Rangers against Etoile Sportive du Sahel , and Nathan Young-Coombes for Rangers in the same match), but we have already seen enough attacking ability at this year’s tournament to believe that figure could be beaten.