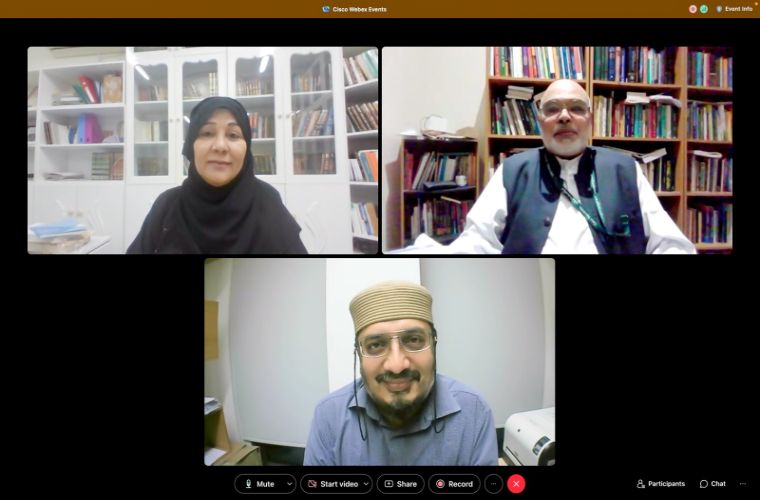 Titled “The Itinerant Philosopher”, the lecture on March 9 illuminated the contributions of the theologian who was one of the few comparative religionists of the Indian subcontinent in the 20th century. Featuring two eminent HBKU academics with specializations in this area - Dr. Dheen Mohamed, Professor of Comparative Religion, and Dr. Muhammad Modassir Ali, Senior Researcher at CMCC - the lecture highlighted CIS’ exceptional scholarly contributions to global Islamic scholarship. Discussions were moderated by Dr. Aisha Yousef Al-Mannai, Director at the CMCC.

The talk offered insight into Dr. Ansari’s life as a teacher of Islamic studies with deep knowledge of the modern sciences. He traveled the world and preached the message of Islam. Among his scholastic achievements, he founded the Aleemiyah Institute of Islamic Studies and the World Federation of Islamic Missions. His internationally acclaimed work, ‘The Quranic Foundations and Structure of Muslim Society’, is considered his lasting contribution to humanity.

“Our overarching goal at CMCC is to give the academic and wider community a more nuanced understanding of various aspects of Islam through the work of Muslim scholars who made enduring contributions to Qur’anic guidance and Islamic civilization. While the event aimed to delve into the authoritative contributions of Dr. Muhammad Fazlur Rahman Ansari as a great modern Islamic thinker, we also valued the opportunity to consider his work in relation to the contemporary challenges we face today,” said Prof. Al-Mannai after the lecture.

Among CMCC’s key aims is to widen access to the major scholarly works of Muslim scholars. One of its initiatives is translating a selection of the Great Books of Islamic Civilization into English and other major languages.

For more information on the research and programs at the College of Islamic Studies, please visit cis.hbku.edu.qa