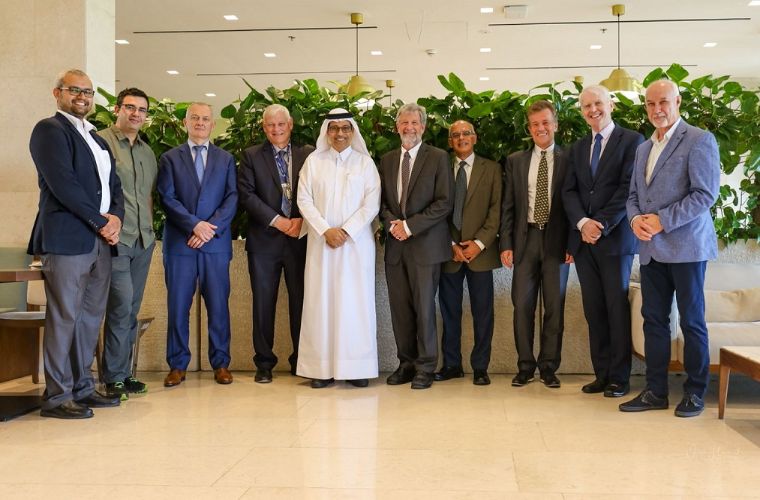 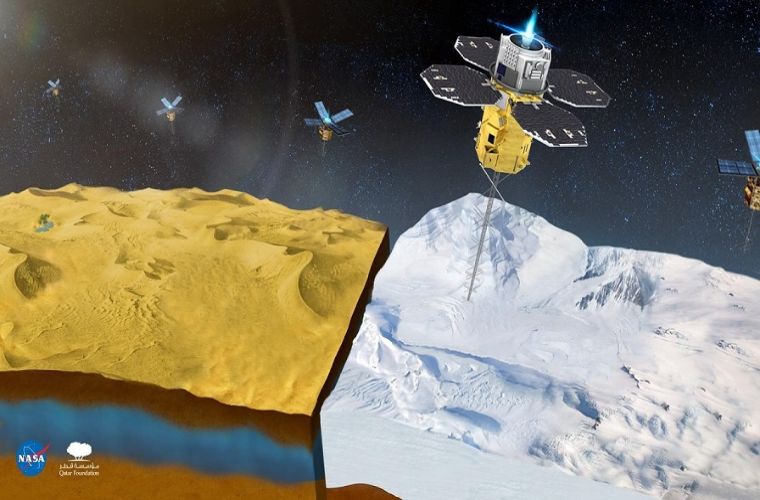 The JPL delegation, led by Mr. James Graf, Director for the Earth Science and Technology Directorate, attended the third Advisory Board meeting aimed at the governance of a climate-focused Earth Mission Concept Study - a joint initiative between NASA and Qatar Foundation (QF). Under the Space Act Agreement signed in April 2020, NASA and QF, represented by QEERI, are jointly formulating the Orbiting Arid Subsurface and Ice Sheet Sounder (OASIS) project, which would explore the impacts of climate change on Earth’s hot deserts and ice sheets for the benefit of science and humanity.

The Advisory Board reviewed the study’s progress and the necessary level of technical maturity that would allow for consideration by NASA and QF to move from the current feasibility phase to the mission development phase next year.

The OASIS mission seeks to advance the understanding of how ice sheets and deserts respond to climate change. Using a low frequency radar constellation of five satellites - the first of its kind - OASIS aims to achieve two primary science objectives. The first relates to the Antarctic, where OASIS will map the topography under the ice sheets which have a critical impact on the extent of global sea level rise. The findings will provide better projections of the range of sea-level rise and its effect on coastal regions, notably on low-lying arid areas such as Qatar and the entire MENA region. The second relates to the hyper-arid regions of North Africa and the Arabian Peninsula, where OASIS will measure deep soil moisture that is an indication of shallow water aquifers.

Scientists at QEERI’s Earth Science Program are working with JPL and international universities to formulate the mission’s concept using technical capabilities from other space missions, such as NASA’s Europa Clipper mission.

Dr. Essam Heggy, the OASIS Mission Concept Study’s Principal Investigator, explains: “OASIS will help us prepare for a rapidly changing world. There is no time left to speculate on the gravities of the projections of sea-level rise and groundwater depletion, whether globally or regionally. Studies show that arid areas are at the forefront of these severe changes, and we desperately need observations to constrain these projections. OASIS is the tool we need, but we have several technical challenges ahead of us to make it work. This is a new endeavor that we have not tried before.”

Dr. Marc Vermeersch, Executive Director at QEERI, added: “QEERI is a key center for research, development, and innovation in energy, water, and environment. Our research is spread across seven core pillars, and we seek partnerships locally, regionally and internationally in our effort to bring meaningful solutions that make a difference. Our work continues at the cutting edge of technology as a result of a dedicated team of researchers working in a state-of-the-art environment. The OASIS project is an example of QEERI’s work on pertinent issues such as sustainability and climate change that affect humanity today and into the future.”

OASIS is a mission concept study funded by Qatar Foundation under a Space Act Agreement with NASA. The study is led by JPL, a research and development center that is managed for NASA by Caltech in Pasadena, California. For more information about OASIS and other initiatives led by Qatar Environment and Energy Research Institute, please visit qeeri.hbku.edu.qa