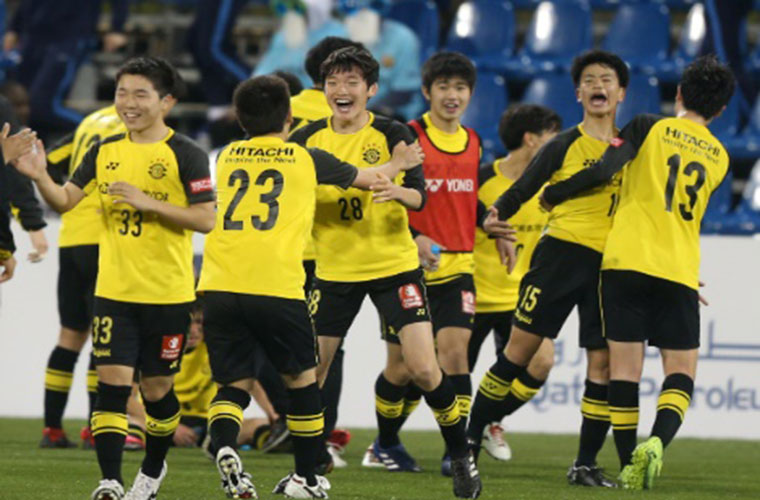 Kashiwa Reysol Pull Off A Stunning Victory Over Barcelona

FC Barcelona failed to get off to a winning start on their return to the Al Kass International Cup as they came up against determined Japanese outfit Kashiwa Reysol.

Former runners-up Kashiwa, beaten 3-0 by Paris St Germain in their opener, were ahead after just 45 seconds as Barca suffered a nightmare start with goalkeeper Alejandro Pinazo putting through his own net.

Receiving a back-pass, he went to clear the ball upfield only to slice the ball and he looked on with embarrassment as it looped back over his head and into the net.

After that, it was all Barcelona and Jan Coca, whose twin brother Jordi was also in the Barca line-up, went down under a challenge from keeper Takuni Itoh outside of the box but Referee Saoud Al Qahthani waved play on.

Had a free-kick been given, Itoh could well have seen red as he was the last man but the Japanese side were relieved that nothing was given.

Although dominating possession, Barca were not creating many chances but Antonio Comino – better known simply as Toni - did test the keeper with a long-range effort.

Minutes later, Ryoga Tanaka went close with a free-kick for Kashiwa but it came as no surprise when Aleix Garrido equalised with a well-taken goal on 32 minutes. He sent Jordi away down the right and the ball was pulled back perfectly for Garrido to fire home.

Jordi almost went from provider to scorer minutes later with a low driver that Itoh got his hands to and the balled bobbled towards goal only to go out for a corner. From the resulting flag-kick Marc Jurado got a header on target but the keeper had it covered.

Jan Coca almost put the Spaniards ahead just before half-time but his effort was comfortably saved by Itoh. There was still time for Toni to go close before the break but he didn’t do enough to worry the keeper and the sides remained level.

Barca started the second half just as the ended the opening period, and Toni crashed a volley against the post on 49 minutes.

Ryunosuke Hanahatsu saw an attempted clearance hit his own bar before bouncing onto the line before going clear.

The skillful Jan Coca was causing Kashiwa all kinds of problems and Toru Nishimura threw himself into a challenge to deny the Spaniard and he almost put through his own goal.

Kashiwa had a great chance on 70 minutes when substitute Shoma Kurita had too much pace for Gerard Hernandez and went clear but Pinazo threw out his left leg to make a fine save, atoning for his first minute mistake.

At the other end of the pitch substitute, Iker Bravo tried his luck with a spectacular overhead kick that had the keeper beaten but hit the post.

The Spaniards were stunned though when Kashiwa took the lead on 86 minutes. Ota Yamamoto sent in a free-kick and skipper Go Otsuki went down in the box under a reckless challenge by Toni, leaving the referee with no alternative but to point to the spot. Pinazo threw himself to the right to pull off a fine save from Yamamoto, who followed up to score.

It was a stunning win for Kashiwa and leaves Barca needing to defeat Paris St Germain on Monday to stay in the competition.