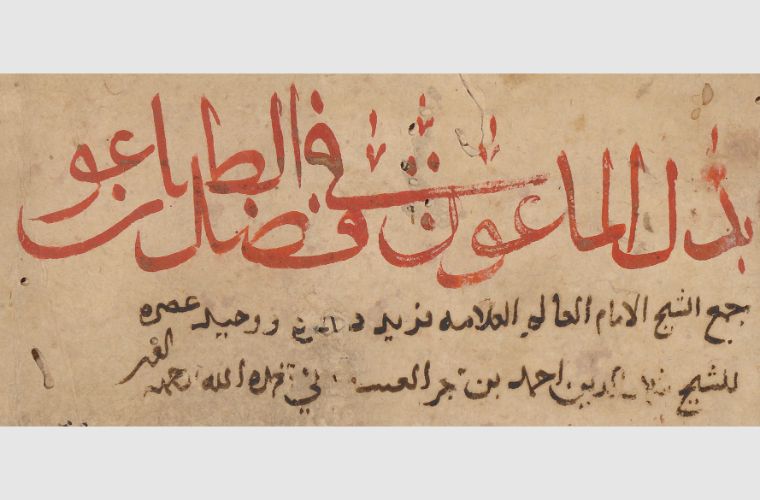 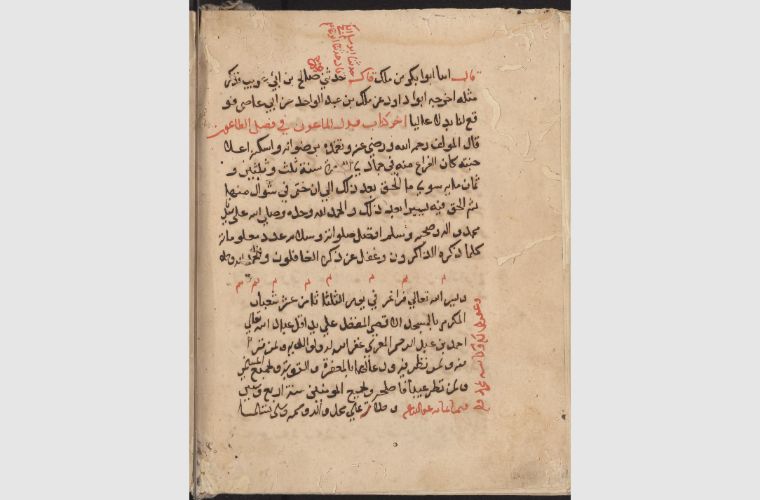 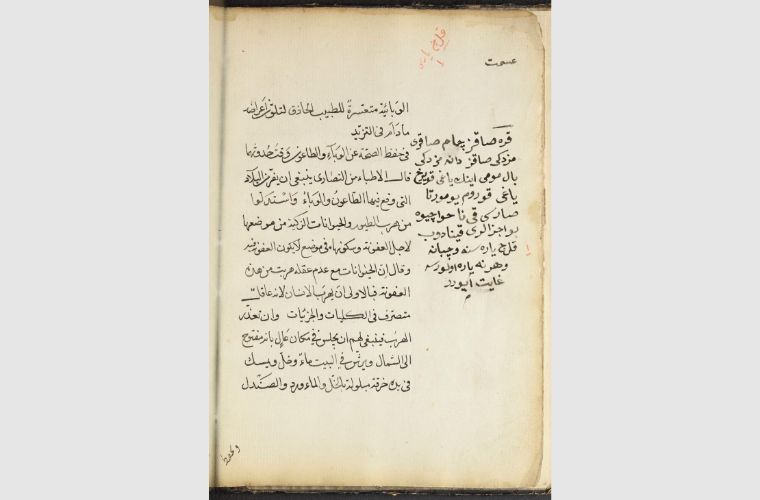 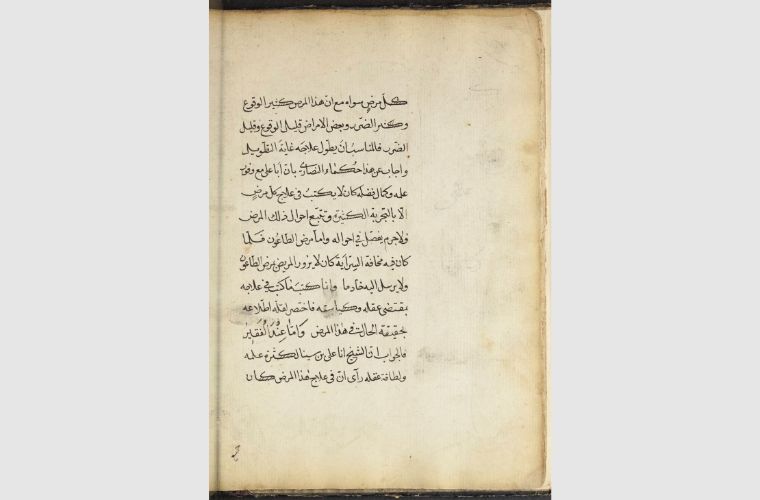 The crisis the whole world has been experiencing over the last year caused by COVID-19, or the coronavirus, is not the first time a pandemic has threatened the lives and livelihoods of human beings. And as an amazing collection of rare books and original manuscripts housed in Qatar National Library reveals, the Muslim and Arab world knew the devastating damage plagues, epidemics and pandemics could inflict.

The Library’s manuscript specialist, Mahmoud Zaki, has been carrying out detailed research through the treasures of the Heritage Library and beyond and has unearthed some extraordinary facts about how past inhabitants of this region managed to survive through those terrible times and live to tell their tales. While his work is yet to be published on the Library’s blog, a lecture recording can be accessed on the website, and  some of these materials are also available through the Library’s Digital Repository (ediscovery.qnl.qa/).

“The history of mankind has witnessed many outbreaks of plagues, epidemics and pandemics,” Zaki says. “In Islamic history, these outbreaks are generally referred to by the Arabic word Ta’un, meaning ‘plague’ and to widespread outbreaks by the words Al Tu’an Al Kabir – ‘the big plague’ – or Al Jaref – ‘the sweeping plague’.

“The isolation imposed on or chosen by Arab and Muslim scholars and authors who witnessed these epidemics led to a large number of texts that are wholly devoted to the subject of epidemics and plagues. They discussed these calamities through medical and theological perspectives, sociohistorical and literary narratives, and general books of Hadith (Prophet’s traditions), Fiqh (Islamic jurisprudence) and medicine. The individual experiences of those who lived through these plagues were clearly present in their works, each according to their discipline and profession.”

Infection caused by plagues and precautions against them are among the earliest writings on the subject. Some date back to the ninth century CE and include an essay by Al-Kindi on “Incenses Purging The Atmosphere Against Epidemics”; “An Essay On Plagues,” by Ibn Abi Al-Dunya; and Ibn Al-Jazzar’s “Causes Generating Epidemics In Egypt.” While all three texts were lost, a later extended text, “Survival Material About Treating Air Spoilage And Avoiding Harms Of Epidemics” was published in 1999, from the latter part of the 10th century CE and attributed to Muhammad Al-Tamimi, also sheds light on the matter.

The catastrophic bubonic plague that is believed to have claimed the lives of as many as 200 million people across Afro-Eurasia between 1346 and1353 CE—known as the Black Death—also features in the available literature. Medieval historian Al-Maqrizi, who was born just a little over a decade after the end of the horrendous event, declared that it originated in China. According to the Egyptian-born scholar’s writings, this plague “covered the regions of the whole world, east and west, north and south, and inflicted all races descended from Adam, and other beings including even fish, birds of the sky and beast animals on the ground.”

Another Arab scholar preceding Al-Maqrizi, Tunisian-born Ibn Khaldun, also recorded with tremendous power about the toll of misery the Black Death brought. He wrote: “Civilization in both the East and the West was visited by a destructive plague which devastated nations and caused populations to vanish. It swallowed up many of the good things of civilization and wiped them out. Cities and buildings were laid waste, roads and way signs were obliterated, settlements and mansions became empty, dynasties and tribes grew weak. The entire inhabited world changed.”

Further manuscripts authored by historians Ibn Khatima and Lisan Al-Din Ibn Al-Khatib, who both lived in Muslim Spain in the 14th century CE, reveal their beliefs about contagion—notably, that taking precautions and preventatives measures did not contradict trust in Allah. Ibn Al-Khatib, in fact, wrote: “To ignore the proofs for plague contagion is an indecency and an affront to God and holds cheap the lives of Muslims”.

Zaki’s research has also uncovered other authors from the tumultuous time who wrote about the plague, including Syrian-born Ibn Al-Wardi, Arabian biographer Assafadee and Egyptian scholar Taj Al-Din Al-Subki. All lost their lives due to the Black Death or associated causes.

Perhaps one of the most important and influential works of the century that followed the Black Death is by Cairo-born Islamic scholar Ibn Hajar Al-Asqalani.

The work, An Offering Of Kindness On The Virtue Of The Plague, is one of the most famous Arabic works on plagues, and was used and drawn upon by many succeeding authors and scholars. Al-Asqalani was a renowned Muslim scholar of Hadith and a historian who lived during the time of plagues. Due to one plague, he lost two of his daughters, followed by his eldest daughter, who died while pregnant during the Black Death. Besides his devastating losses, Al-Asqalani endured other plagues and became ill in one, though he recovered.

Says Zaki: “Like many other scholars, Al-Asqalani structured his book around the Prophet’s traditions and attributed narrations with that containing a set of directions and guiding in brief words. The most important of these narrations are: ‘Allah has sent down both the disease and the cure for every disease, so treat yourselves medically, but avoid any untoward methods; ‘Allah does not send down any disease but He also sends down a remedy with it’; ‘Those who are sick infected with contagious diseases should be kept away from those who are healthy’; ‘If you hear about it (an outbreak of plague) in a land do not go to it, but if a plague breaks out in your own neighborhood, do not run away from it’; and ‘Anyone (among the believers) who stays in his home patiently in the time of an epidemic plague hoping for Allah’s Reward and believing that nothing will befall him except what Allah has written for him, will get the reward of a martyr.’”

Zaki says: “Ben Ibrahim commentated in detail on the plague fever, citing the experience of his fellow physicians, and comparing their treatments with those of Muslim physicians, including Ibn Sina, regarded as the father of early modern medicine, who lived in the late 10th and early 11th centuries CE. He referred to the response of Christian physicians and their decision to flee from the plague, and detailed the health measures that could be taken to be protected from the plagues, such as the use of a piece of cloth moistened with vinegar, rose water and sandalwood, highlighting the importance of the patient’s mental health in coping with epidemics. He quoted Plato, saying: ‘A skilled physician must treat the mood that is predisposed to a disease before the occurrence of that disease.’”

Responses to today’s global pandemic caused by the coronavirus remain very much uppermost in people’s thoughts, not just across Qatar but all over the world. With the Library’s incredible wealth of documents on plagues of the past available to see, it may be comforting to remember that these terrible events did not last forever, and normal life did eventually return for those who came before us.