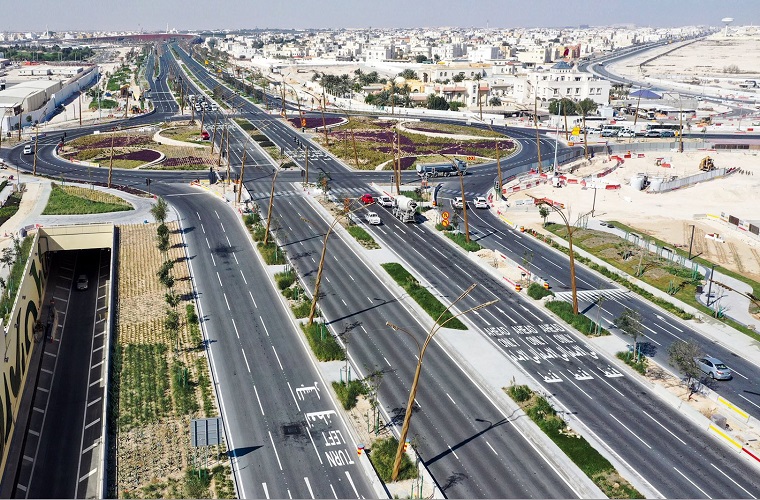 The new signalized intersection will be opened partially alongside the service road on Huwar Street to provide entrances and exits to Al Luqta area from one side and Qatar Foundation from the other side and they will link Al Furousiya Street and Al Luqta Street all the way to Al Gharrafa area which will improve the traffic.

Abdullah Qasim, from the Highway Project Department, said that Ashghal has accomplished about 95% of the works on Khalifa Avenue project and that the project is scheduled to be completed within the year.

Most parts of the project have been opened to traffic, which contributed immensely to improving the traffic in the area, since the project connects Al Rayyan road with Dukhan road, as well as Al Gharrafa Street, Huwar Street and Al Furousiya Street, while serving Al Rayyan, Bani Hajer, Al Gharrafa, Al Luqta and Gharrafat Al Rayyan areas, he added.

Ashghal is currently working to complete Khalifa Avenue project, which is one of the main new arteries that will serve the east and west of the country and link them to central Doha, as well as the Education City Stadium, one of the 2022 World Cup stadiums.

As for road users coming from the Tilted Intersection, they will be able to use the exit to go to Al Furousiya Street, make a U-Turn or turn right towards Qatar Foundation Gate No. 5.

Moreover, with the opening of the intersection and service road, the entry and exit from Qatar Foundation's Gate No. 5 and Al Diyaa Street will also be available.

Khalifa Avenue project runs from Al Wajba Palaca Interchange (west) to the Tilted Interchange (east) and it is known as Khalifa Avenue, and also along Al Gharrafa Road from Al Rayyan Street (south) to Thani Bin Jassim Street (north), and this part of the project connects with the Titled Intersection.

Khalifa Avenue project is being implemented using Qatari-made materials, which is a clear indication of success in facing the blockade, and it is also a message to the blockading countries that Qatar, under its wise leadership, is continuing to fulfill its ambitious vision and achieve sustainable development, Ashghal said in a statement.