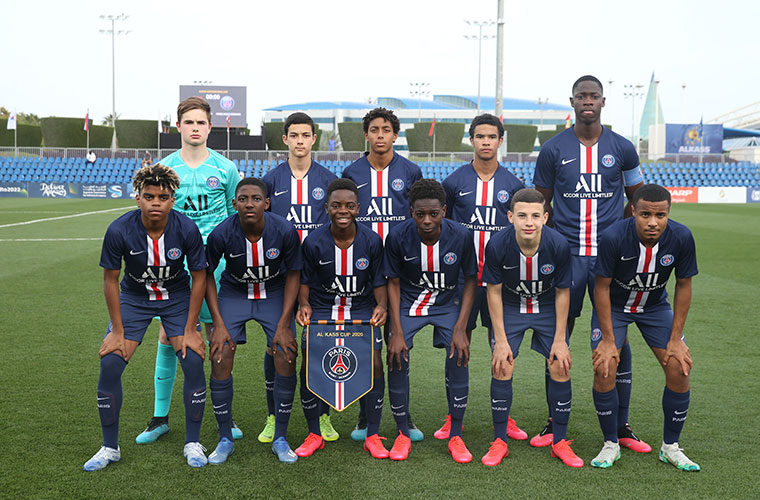 Both sides came into the game with points to prove. PSG needed to forget the disappointment of their shock semi-final defeat to Milan, and demonstrate their top-class credentials once more. The Moroccans, meanwhile, were keen to show that their hugely impressive showing at Al Kass thus far was not merely a flash in the pan. However, key players were missing from each line-up, with PSG’s Ilyes Housni and the Academy’s Omar Sadik dropped to the bench.

The game got underway with a tempo that belied its playoff status, and it quickly became apparent that the two teams were playing to win. A fascinating duel unfolded between PSG’s superb holding midfielder Warren Emery and his opposite number Mohammed Jazouli, restored to the starting 11 after serving a semi-final suspension.

And yet, despite the game’s competitive nature, clear-cut chances were at a premium early on – perhaps a reflection of the fact that both sides’ star forwards had been rested.

Indeed, when the deadlock was broken midway through the first-half, it was in freakish circumstances. Stand-in Moroccan keeper Zakaria Nakhly had the ball at his feet with no one near him, but somehow contrived to pass it straight to Ismael Gharbi on the edge of the area. PSG’s prolific midfielder stroked the ball home with a minimum of fuss to claim his fifth goal of the tournament.

Moments later, the scoreline almost doubled after Gharbi teed up Yohan Tade through the inside left channel, and he beat his man before shooting just wide of the far post. Suddenly, the game had opened up and, 10 minutes before the break, the Moroccans levelled. There seemed little danger when a high ball over the top sent Hassan Aqboub scuttling away down the left, but the rapid winger cut inside and produced a fabulous finish, his low shot evading PSG keeper Henri Maton’s despairing dive for one of the goals of the tournament.

Mohammed VI made three changes at half-time, with Sadik remaining notable by his absence. Nevertheless, coach Laurent Cauger’s bold move brought instant rewards as the Moroccans plundered two goals within five minutes of the restart. First, Aqboub found himself at the heart of things once again, as he cut in from the left and hammered a low, diagonal shot that Maton could only parry into the path of substitute Oussama Lyakoubi, who made no mistake from close range. Minutes later, the lively winger claimed his second, after beating Younes El Hannach in a foot race down the left and deftly lobbing the loose ball over Maton into an empty net.

The Academy were threatening to run riot, with Jazouli - playing with a swagger reminiscent of the Dutch Master Frank Rijkaard - the heartbeat of their team. On the hour mark, PSG coach Herve Guegan introduced Housni for the tiring Gharbi and, soon after, the deficit was reduced. Wilson Odobert produced a deft chip from the right of the penalty area, which was met by Tade at the far post, and his fierce header gave Nakhly no chance.

With 20 minutes remaining, PSG should have been level after referee Khaled Al Nabet pointed to the spot following Abdellah Baallal’s foul on Jouvenice Americo in the area. Astonishingly, the normally surefooted Housni blasted the resultant penalty high over the bar. However, the diminutive striker did not have to wait much longer to make his mark, applying an impudent first-time finish to Tade’s cutback to level matters at 3-3.

Housni’s fresh legs were testing the tired limbs of the Moroccan backline as he chased every loose ball and generally harried the defenders into losing possession. And yet, despite the undoubted impetus that his introduction had given the Parisians, they could not claim a fourth, and the clock ticked down towards an inevitable penalty shootout.

Emery was up first, and the 13-year-old made no mistake. Appropriately enough, his midfield rival Jazouli was up next, and he produced a similarly assured finish. Then, Ayman Kari coolly chipped home off the bar for PSG, before Youssef Charouq’s low effort clipped the wrong side of the post and went wide.

Next Nehemiah Veliz slammed home, followed by Mohamed Al Asghar for Mohammed VI, and El Hannach maintained PSG’s 100% tally with an assured finish low to the right. Baallal needed to score to keep his side in the contest, but his high shot cannoned down off the crossbar and out again. It was cruel on the Moroccans, who have made many friends with their fearless approach and will surely be welcomed back to Doha, as will their Parisian opponents.