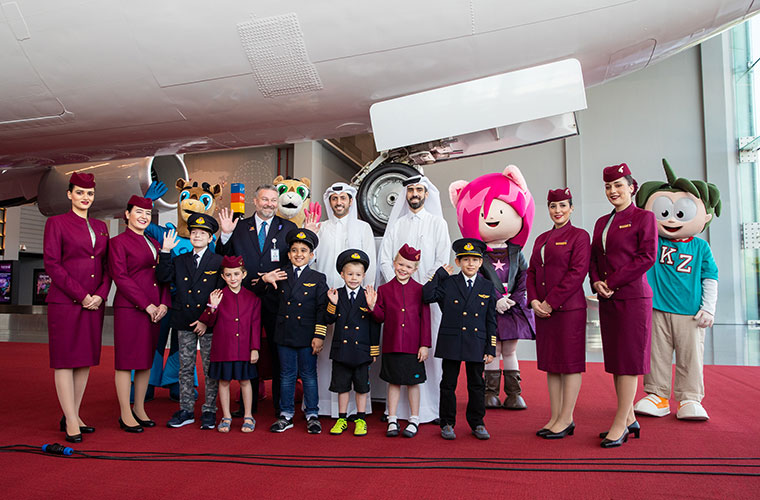 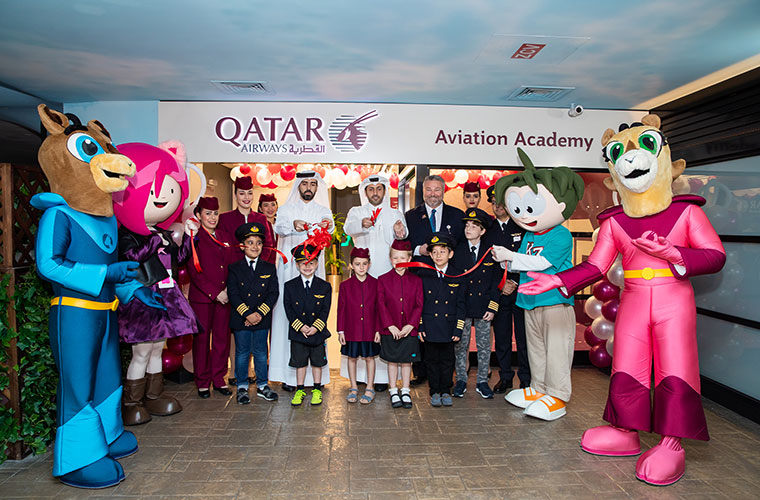 The airline unveiled the installation of one of its aircraft at the Aviation Academy at a press conference led by Qatar Entertainment Company (Tasali) Board Member and Deputy Chief Operating Officer of Aspire Logistics, Mr. Rashid Al Khalifa; and Manager Cadet Pilot Program, Captain Ahmad El Said.
The aircraft has been converted into a simulator that allows kids to role play as pilots and cabin crew and immerse themselves as in the world of aviation and travel, learning how to ensure the safety and comfort of passengers onboard. Parents can join in the fun as they role play as passengers receiving award-winning inflight hospitality from their children. Visitors entering KidZania Doha will be welcomed at the Qatar Airways branded check-in desks, by personnel dressed in Qatar Airways uniforms.
Qatar Airways Senior Vice President Marketing and Corporate Communications, Ms. Salam Al Shawa said: “We are delighted to contribute and stimulate the minds of the youth by allowing them to ignite their imagination as they role play as Qatar Airways pilots and cabin crew.  Our partnership with KidZania Doha brings children’s aviation dreams to life in a way that integrates education and entertainment together. At Qatar Airways we take seriously our role in inspiring and encouraging our aviation leaders of the future.”
Qatar Entertainment Company (Tasali) Board Member and Deputy Chief Operating Officer of Aspire Logistics, Mr. Rashid Al Khalifa, said:  “At KidZania, we seek to encourage and stimulate the early development of children through playful learning and the use of imagination and creativity toward their future paths. We completely align our efforts with Qatar’s National Vision 2030 to help boost human, educational, social and economic development in the State of Qatar.”
KidZania Doha is an educational-entertainment concept for children designed by educators, where children can independently choose from an array of real life activities to simulate. It manages more than 28 parks worldwide, of which Qatar Airways is a proud co-sponsor of its Kuwait and Singapore locations, in addition to KidZania Doha located in Aspire Park.
Built around the concept of the ‘City of Education and Entertainment,’ KidZania features an interactive kid-sized city, which was developed for and is managed solely by children between the age groups 2-14. The self-sufficient city includes more than 60 real life simulation activities across diverse business environments, and allows children to dress up and role-play realistic tasks in a safe, interactive and meaningful environment.
The Edutainment park, with its own economy and currency, has been designed to provide a holistic experience to support physical and mental development amongst children, and help improve their self-esteem and confidence.
The theme parks are benefiting from a growing need around the world for unique experiences aimed at children and youth that combine entertainment and education. With 28 facilities around the globe, from Mexico City to Tokyo to London, KidZania annually hosts more than nine million visitors in 21 countries.
KidZania Doha is owned and operated by Qatar Entertainment, Tasali W.L.L.  A great partnership between highly reputed and well-known companies in the private sector ( Sharaka Holdings) and the public sector ( Aspire Zone Foundation) coming together to support the Qatar National Vision 2030. KidZania Doha has been honored with awards of appreciation from The Ministry of Education and Higher Education, Qatar National Tourism Council, Best Buddies and Shafallah, Qatar Green Building Council and Qatar Cancer Society. It is located in Aspire Zone, one of the most visited and centrally located attractions in Doha, and has been classified as one of Qatar’s most accessible venues by Accessible Qatar.
Qatar Airways currently operates a modern fleet of more than 250 aircraft via its hub, Hamad International Airport (HIA) to more than 160 destinations worldwide. The national carrier for the State of Qatar has recently launched an array of exciting new destinations, including Rabat, Morocco; Izmir, Turkey; Malta; Davao, Philippines; Lisbon, Portugal; Mogadishu, Somalia and Langkawi, Malaysia, and will add Gaborone, Botswana, and Osaka, Japan.
The multi-award-winning airline was named ‘World’s Best Airline’ by the 2019 World Airline Awards, managed by international air transport rating organisation Skytrax. It was also named ‘Best Airline in the Middle East’, ‘World’s Best Business Class’ and ‘Best Business Class Seat’, in recognition of its ground-breaking Business Class experience, Qsuite. Qatar Airways is the only airline to have been awarded the coveted “Skytrax Airline of the Year” title, which is recognised as the pinnacle of excellence in the airline industry, five times.