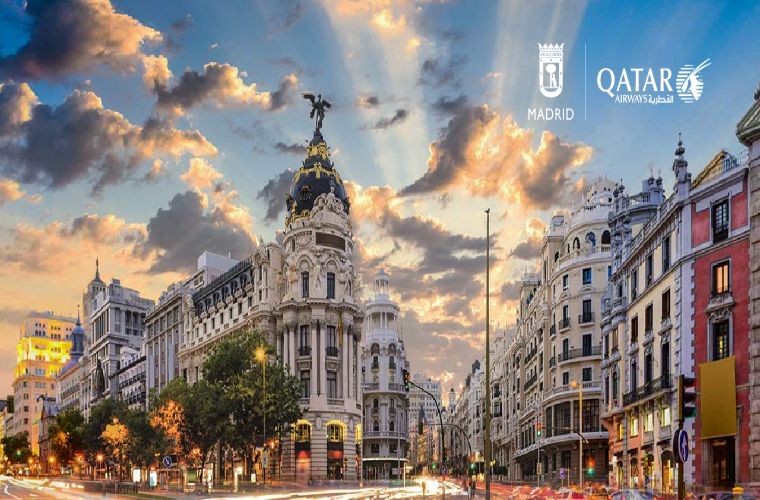 Qatar Airways Partners with Madrid Destino, Madrid’s Tourism Board to Drive Tourism to the City

Doha, Qatar - December, 2021 : Qatar Airways is pleased to announce a new partnership with Madrid Destino, the tourism board of Madrid, Spain in a strategic move to support tourism growth to the pulsating city.

The partnership with Madrid Destino was signed on 25 November this year, and is set to run until 31 March 2022, promoting the destination to key markets across the globe through a series of joint initiatives.

The Spanish capital has emerged as a new international luxury destination following it being designated a UNESCO World Heritage Site and having recently opened an array of luxury hotel brands, undertaking remodelling works for sites including the Plaza de España as well as several other key developments.

Madrid is also recognized as Europe’s Best Convention and Trade destination, garnering the Best MICE Destination for 2021 as part of the internationally acclaimed World Travel Awards.

Qatar Airways Group Chief Executive, His Excellency Mr. Akbar Al Baker, said: “We invite everyone to experience Madrid’s lively city that makes one passionate about travelling again. The Spanish city is famous for its rich and varied heritage, as well as its world-class crafts and artisans”.

Héctor Coronel, Director of Tourism at Madrid City Council, said: “The signing of this agreement not only marks a milestone in our relations with Qatar Airways, which has been operating in Madrid since 2005, it also enables us to strengthen our tourism relations with the Middle East, one of our main strategic markets. The connectivity campaign that Madrid City Council’s Tourism Department and the Qatari airline are running in Qatar and the UAE is aimed at a segment that has a significant economic impact on Madrid. This joint initiative will enable us to promote the city’s outstanding tourist resources and new openings with a view to encouraging visitors with high purchasing power to travel to the city of Madrid”.

The Boeing 787-9 is the latest member of the Boeing aircraft in Qatar Airways’ fleet. As the Middle East launch customer for the Boeing 787, the airline has continued to fly its fleet of 30 787-8s throughout the COVID-19 pandemic due to its strong fuel efficiency and excellent reliability record. Qatar Airways’ investment in the 787-9 once again underscores the airline’s commitment to sustainability and achieving net zero carbon emissions by 2050.

The national carrier of the State of Qatar continues to rebuild its network, which currently stands at over 140 destinations. With more frequencies being added to key hubs, Qatar Airways offers unrivalled connectivity to passengers, making it easy for them to connect to a destination of their choice, seamlessly.

In addition to this, Qatar Airways is the first global airline in the world to achieve the prestigious 5-Star COVID-19 Airline Safety Rating by Skytrax. This follows the success of Hamad International Airport (HIA) as the first airport in the Middle East and Asia to be awarded a Skytrax 5-Star COVID-19 Airport Safety Rating. These awards provide assurance to passengers around the world that the airline’s health and safety standards are subject to the highest possible standards of professional, independent scrutiny and assessment. For full details of all the measures that have been implemented on board and at HIA, please visit qatarairways.com/safety.

About the City of Madrid Tourism Board

The City of Madrid Tourism Board is responsible for managing and promoting tourism in the city of Madrid. Its mission is to create incentives for this driver of economic, social and cultural development in the capital by optimising the use of the City Council’s economic resources with public/private collaboration as the main tool. With a strategy outlined in the 2021-2023 Strategic Tourism Plan that aims to attract higher quality tourism with a greater economic impact which is safe and sustainable, making use of tools like digitalisation and new technology to position Madrid as a benchmark for leadership in tourism.