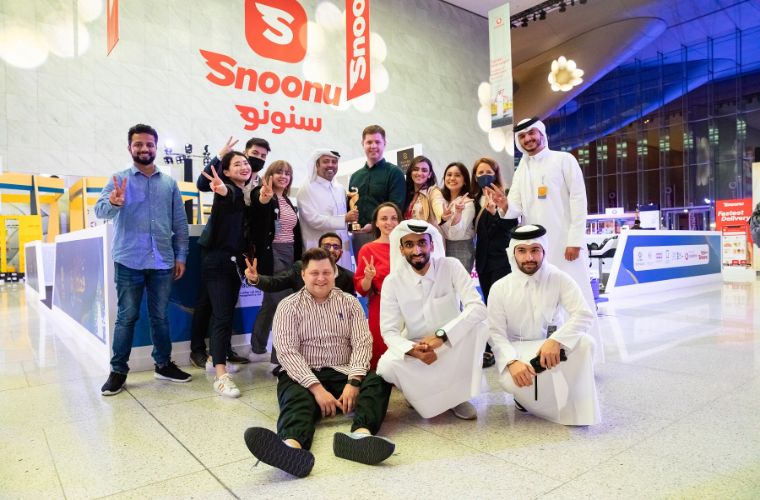 Doha, Qatar - 9 March 2022: Qatar’s leading tech startup, Snoonu, is delighted to announce that it has won the “Best Project for Entrepreneurs,” for the second consecutive year at Najah Qatari, for their continued contributions in the development of entrepreneurship in Qatar.

Founded by Faisal Bin Khalid Al-Otaibi, Najah Qatari or “Qatari Success,” festival is one of Qatar’s most distinguished events which highlight innovation, invention, and entrepreneurship in various sectors in Qatar. The event is attended by several different entities including royal family members, ministers, Qatari businessmen and women as well as many prominent public figures across several fields. This year’s awards were divided into eight different categories with eight different winners who were announced at the valedictory ceremony held on Saturday, 5th March at the Qatar National Convention Centre.

Snoonu won ‘Best Project for Entrepreneurs’ for the second consecutive year. The company continues to demonstrate its leadership, and agility whilst setting pace for new technologies and new trends in the country.

The award also recognises Snoonu’s strategic and determined efforts in attracting and retaining top talent locally and internationally through partnering with top universities and creating a unique work environment for employees. Snoonu continues to expand its team to match the company’s growth by hiring top talent from all around the world, currently counting more than 45 nationalities.

Commenting on the award, Hamad Al Hajri, Snoonu founder and CEO, and platinum sponsor of the festival, said: “We are honored to be the official sponsor of the ‘Najah Qatari” festival in its fifth edition. One of the main objectives of Snoonu is to encourage and support other entrepreneurs in the country. We also believe in developing the talent within, which is why we always motivate companies in the private sector to focus on attracting young talents that will help them build their own successes story.”

“We aim to have our efforts recognised both locally and regionally and winning this award has put us on the right path in achieving this. Winning such a prestigious title would not have been possible without the support of our loyal users and our exceptional team.” Hamad added.

Snoonu is Qatar's home-grown success story that aims to be the first local Unicorn company – a privately held startup company with a value of over $1 billion. With over 300,000 users, Snoonu plans to expand and diversify its offering by adding new features and services to its platform, with a goal to enter international markets, including the Middle East and CIS.