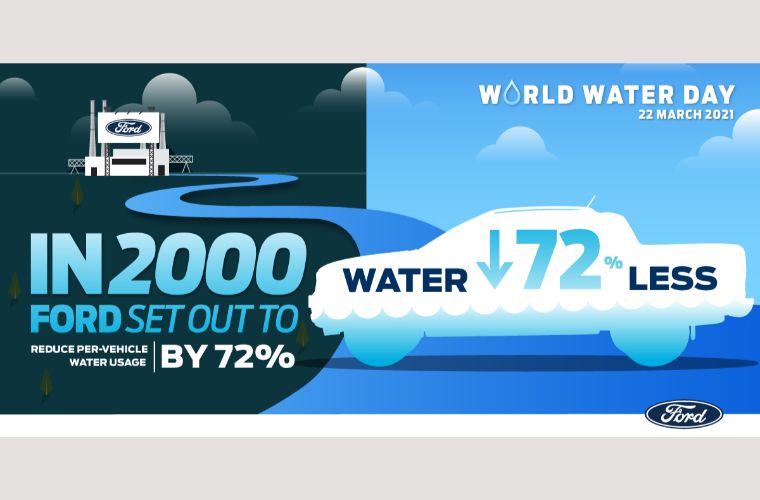 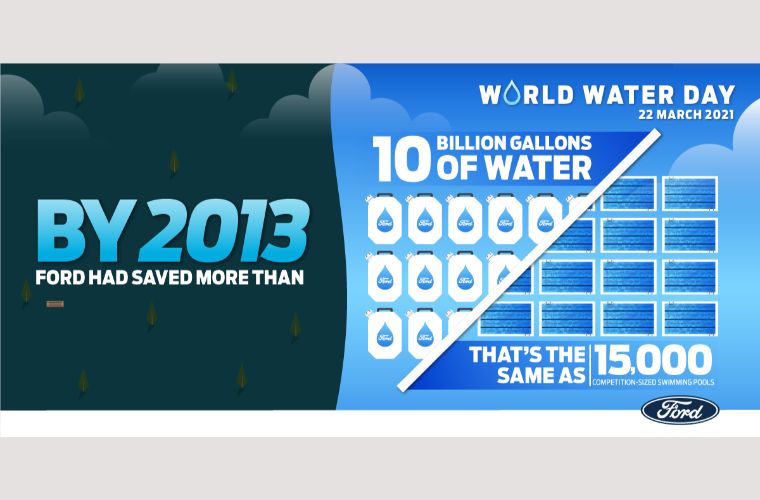 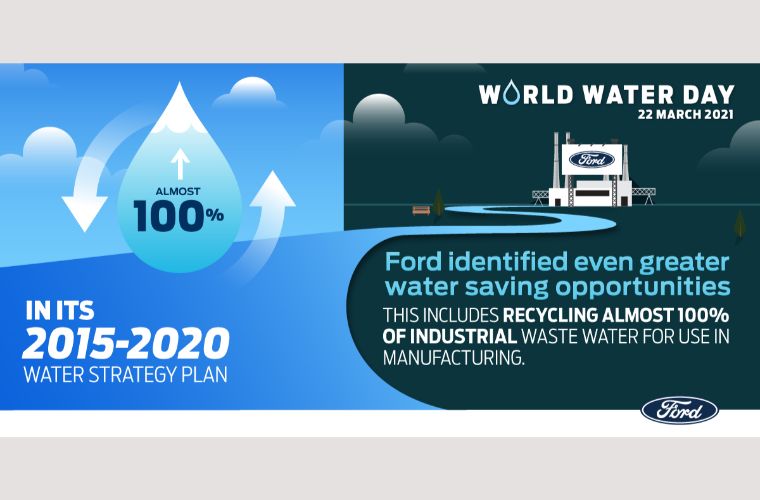 Sophisticated technology upgrades and smart water efficiency processes have been introduced, contributing to billions of gallons of water being saved


Of all water on the planet, only about one per cent is easily accessible fresh surface water available for consumption by the almost eight billion humans that inhabit it. Approximately 97 per cent is salt water, while the majority of remaining fresh water is frozen in ice caps and glaciers, or difficult to access ground water./


Two decades ago, Ford set out to reduce its per-vehicle water usage by an astonishing 72 per cent. By 2013, Ford had already saved more than 10 billion gallons of water. In perhaps more digestible terms, that’s the same as 15,000 competition-sized swimming pools; or over 3 hours 40 minutes of thunderous Niagara Falls flow.


While an admirable target, Ford sought to do more, setting itself an aspirational long-term goal of using zero fresh water in its manufacturing. That target is still in Ford’s sights, and the company has already made considerable steps towards ensuring that the only fresh water use at its facilities is for human consumption.


Ford’s Global Technology and Business Centre (GTBC) in Chennai – opened in 2019 – earned its Platinum green building rating at launch; the highest possible certification for sustainable buildings. The globally recognised certificate not only factors in water conservation but also sustainable design, architecture, and building material resources; energy conservation including use of renewable energy resources; indoor environment quality; and innovation and development.


At Ford’s Chennai Vehicle Assembly and Engine Plant (VAEP), fresh water consumption is down to an incredible 1.17 m3 per vehicle – down from 7.3 m3 per vehicle only a decade ago. Having identified an alternate source of grey water to treat for use in non-production activities, the smart water efficiency processes see it recycle almost 100 per cent of industrial waste water for use in manufacturing.


Ford’s other Indian-based VAEP in water-scarce Sanand boasts zero water discharge, with a 110,000 m3 rain water harvesting pond used for pallet washing, irrigation, and with plans in place to replace the cooling tower’s water with rainwater, too. Incidentally, Ford GTBC can also claim zero discharge thanks to its 100 per cent reuse of treated wastewater for dual plumbing, horticulture, and cooling tower chiller.


While there are no specific regulations or usage restrictions on water use at Ford’s Vietnam assembly plant – which draws from the Thai Binh River – a membrane bio reactor (MBR) based sewage treatment plant has recently been installed which, when it becomes fully operational in June 2021, will enable Ford Vietnam to recycle water.


In Thailand, both Ford Thailand Manufacturing (FTM) and Auto Alliance Thailand (AAT) receive a small quantity of recycled water from the government for use across its horticulture and washing requirements, but have aspirations to expand water conservation efforts, including the possibility of reusing treated wastewater back into the manufacturing plant.


Last year, Ford South Africa announced the launch of Project Blue Oval; a renewable energy project which aligns with the company’s global target of using 100 per cent locally sourced renewable energy for all its manufacturing plants by 2035, and achieving carbon neutrality by 2050. In its first phase, construction of solar carports for 4,200 vehicles at the Silverton Assembly Plant will go a long way to seeing the Pretoria property become entirely energy self-sufficient and carbon neutral by 2024 – the very first Ford plant to achieve that status.


Also included in Project Blue Oval planning is the implementation of treated wastewater reuse at the assembly plant. The short-term goal will be to capture 100 per cent of the facility’s wastewater for recycling, and to reuse the maximum available volume back into the manufacturing process. The long-term goal will be to identify and utilise alternative non-fresh water sources to eliminate the use of fresh water in manufacturing entirely.


Beyond its manufacturing, Ford has helped the World Vision South Africa water project deliver ‘water from air’ to drought-stricken areas of Nelson Mandela Bay in the Eastern Cape, and has in the past been recognised as one of a very few A Grade companies by CDP – a non-for-profit global disclosure company for environmental reporting. Funded by Ford Motor Company Fund, the Bill Ford Better World Challenge, and Ford Research and Advanced Engineering, World Vision SA was able to acquire an innovative Watergen GEN-350 atmospheric water generator, which extracts clean and fresh drinking water from moisture in the air in an energy-efficient manner, and is capable of producing 900 litres per day.


“Some of our Ford production plants around the globe are in what could be considered water-stressed areas, which means it’s our responsibility to act consciously to protect one of our most vital resources,” said Caro Hosier, director of Sustainability, Environment and Safety Engineering for Ford International Markets Group. “Despite the exceptional advancements already made in water conservation, Ford continues to look for new innovative and efficient ways to achieve its long-term goal of using zero drinkable water in its manufacturing.”