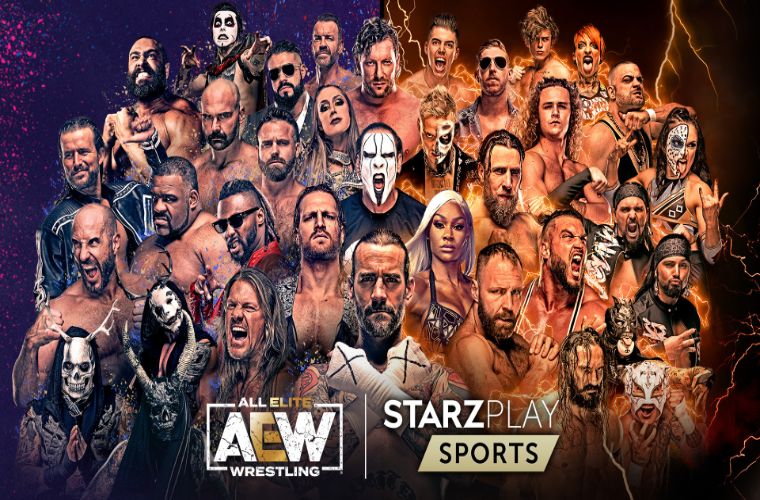 Doha, Qatar - September, 2022: Continuing its commitment to bringing the best and most popular sports to its newly launched sports service, STARZPLAY has announced its partnership with All Elite Wrestling (AEW) to exclusively bring AEW content to MENA audiences. AEW is the new professional wrestling league taking the world by storm with its meteoric rise, record-high ratings, world-class roster and highly entertaining product.

STARZPLAY will exclusively stream all of AEW’s weekly programming on its new sports channel and on demand as a part of the STARZPLAY Sports package.  Each week, fans can enjoy all the action from AEW: DYNAMITE, AEW: RAMPAGE, AEW: DARK and AEW DARK: ELEVATION – as well as “Battle of the Belts” and all AEW pay-per-view events at no additional cost to STARZPLAY Sports subscribers. Kicking off the partnership, STARZPLAY streamed, All Out live on Monday morning featuring matches including Jon Moxley vs CM Punk for the AEW World Championship, “Lionheart” Chris Jericho vs. “American Dragon” Bryan Danielson, the AEW World Tag Team Championship, AEW World Trios Championship Finals and Casino Ladder Match.

Andy Warkman, Head of Sports, STARZPLAY, said: “We are very excited to be partnering with AEW in the Middle East. AEW has seen huge success and growth since launching in 2019, and we look forward to working closely with AEW to localise and grow the brand and existing fanbase even further across our region. AEW is a key addition to STARZPLAY Sports and to STARZPLAY as a whole. We have some exciting plans coming up, and we cannot wait to get started.”

Tony Khan, CEO, GM and Head of Creative, AEW, said: “We’ve stated since our launch that we want to make this the greatest time ever to be a professional wrestling fan, and part of this plan is to make our product as accessible as possible to a global audience.  As we expand to the Middle East, we searched for the best partner in the business, and the natural choice for us was STARZPLAY.  With STARZPLAY as our new partner, we’ll now be able to showcase the best professional wrestling that fans in the Middle East demand and deserve.  We can’t wait for fans across the Middle East to experience our dynamic storytelling, exhilarating action and tremendous roster of global stars and homegrown talent on a weekly basis.  And, we were thrilled to kick off the collaboration with the ALL OUT pay-per-view event from this past weekend.”

As part of its long-term strategy, STARZPLAY is building its sports content category into one of its core products, offering the best in sports entertainment to its 2.1 million subscribers across the region.  The new STARZPLAY Sports package will complement the platform’s existing entertainment offering.  With STARZPLAY the new, exclusive hub for AEW programming, the AEW Plus streaming service – the previous home to all AEW content – will be turned off in the region.

STARZPLAY’s sports, AEW and entertainment content can be enjoyed through starzplay.com and the STARZPLAY mobile apps. Subscribers can enjoy the fantastic quality on their big screens via the STARZPLAY television app available on Android TV, Apple TV, Smart TVs, PS4 or through casting video from the mobile app to TV through AirPlay or Google Chromecast.

With thousands of hours of premium content including the best western content, Arabic shows, Turkish favourites, anime, and live sports, STARZPLAY is today the number one streaming platform in the MENA region.  The service is available in 19 countries across the Middle East, North?Africa?and Pakistan for fans to enjoy quality content anytime, anywhere, and from any device.??