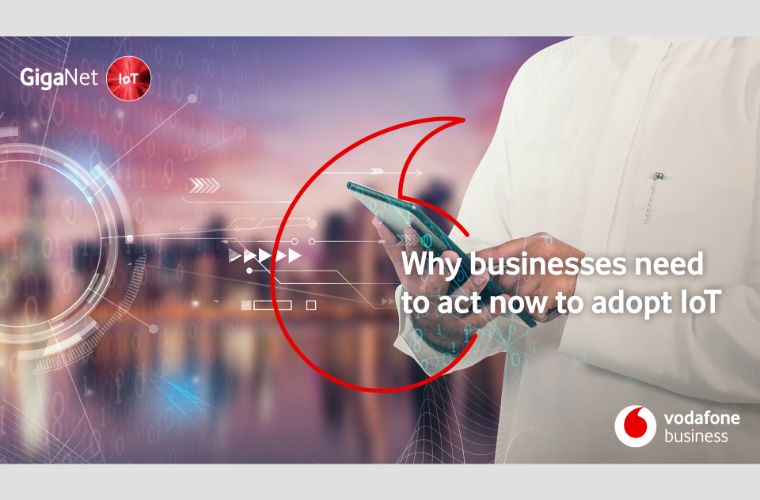 Why businesses need to act now to adopt IoT

The Internet of Things (IoT) has been making waves across most industries over the last few years and many businesses in Qatar have been reaping the benefits of adopting this kind of technology. The potential for the IoT is huge, and goes beyond just smartphones, wearables and computers to include devices such as light switches, vehicles, farm equipment, manufacturing machinery and security solutions – all of which can communicate with each other. Businesses can use IoT to gather real-time data about their operations that they can then use as a strategic tool to support everyday decisions.

IoT in the spotlight

Last year, Vodafone released its IoT Spotlight Report 2020 which provided a snapshot of global IoT usage. It found that IoT is key to improving business performance and generate real business value, with 95% of respondents seeing a positive return on investment.

There are multiple benefits of adopting IoT, including being able to improve operational efficiency and create new connected products. CEOs are able to make their resources go further and focus on what really matters; their business. 84% of businesses say that they can do things they couldn’t before adopting IoT technologies and 80% have seen a rise in revenue. Strikingly, IoT has enabled over half of businesses to decrease their operating costs by an average of 21%.

Meanwhile, Vodafone’s Middle East Barometer Report 2019 found that the IoT is driving innovation and renewed economic growth across the region. Over a third of those surveyed are already embracing the opportunities on offer by adopting this technology, and the events of the past year have further catalysed the digital transformation of so many sectors.

The reason to adopt early

During the COVID-19 crisis, all businesses have had to adapt and respond to the new environment in which they now operate, and most adopters feel that IoT was a key factor in maintaining business continuity throughout the period. In fact, 73% of adopters are confident that companies that have failed to embrace IoT within five years will have fallen behind, meaning IoT can create sustainable, long-term, competitive advantage.

For many businesses, adapting to new technologies has previously been viewed as a daunting prospect, or perhaps a ‘nice to have’ rather than a fundamental need. They’ve implemented these technologies reactively, rather than them being part of a proactive, strategic decision. However, IoT solutions are now more accessible and affordable than ever, so businesses can and should act now, and consider IoT part of their core infrastructure.

Notable examples of IoT in use across Qatar include Qatar General Electricity & Water Corporation’s (KAHRAMAA) digitalisation of the nation’s utilities industry, via a partnership with

Another good example is Loop’s smart scooter sharing service, powered by Vodafone’s IoT connectivity solutions. Preinstalled Vodafone IoT SIM cards ensure that Loop is constantly connected with its fleet of scooters via a web-based dashboard that lets the Loop team track their electric scooters, monitor their condition and batteries, and bring them back to the docking station to be ready for the next ride. This project is helping to improve access to public transport in Doha and shows how IoT is playing a vital role in smart cities by enabling connected solutions that lower emissions and improve efficiency – goals aligned with Qatar National Vision 2030.

To find out how the IoT can transform your business, head to: https://www.vodafone.qa/en/business/services/iot/internet-of-things