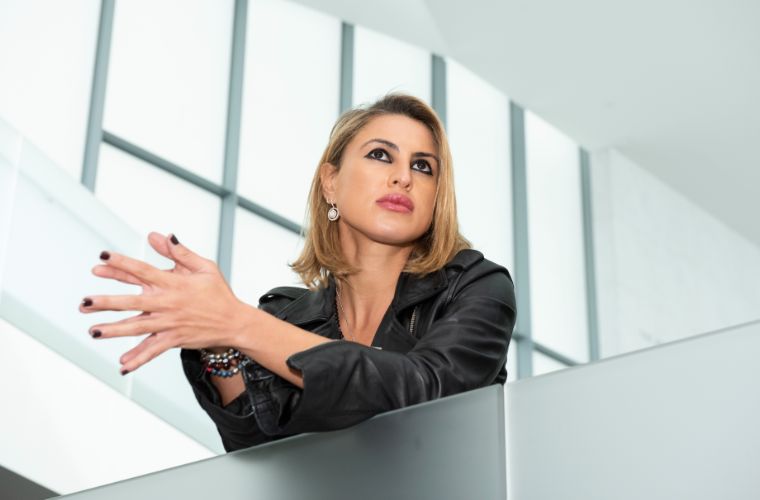 Visitors can expect to be transported to a multi-dimensional setting where an original body of neo-classical cinematic and electronic compositions are combined to form an innovative contemporary arrangement that merges with a merriment of colour and light. The headlining concert will bring together Dana’s innovative vision with a spectacular set. One that is designed to promote an introspective journey that plays on the power of the naked eye and one’s own consciousness, in a bid to elevate viewers towards their higher self.

The live performance is set to feature a chamber orchestra, state-of-the-art light design and projection, and a mood-capturing colour scheme to transform the open-air surroundings at Qatar Foundation’s Ceremonial Court in Education City Doha. Similar to INDIGO’s impressive release showcase, Crystalline, audiences will be drawn into a serene space for a show that evokes and pushes human senses to their limits.

In line with INDIGO’s deeper concept, the concert will create an experience for the audience that allows them to engage with a space outside of the noise that occupies the stresses of everyday life. The show is inspired by the album’s nod to the theory of colour by Johann Wolfgang Goethe, which states: “We observed that all nature manifests itself by means of colour to the sense of light.” Therefore, by manipulating light and colour along with an infusion of sound, the INDIGO concert alters the ambience into a unique perception for each viewer.

As the human eye, and our consciousness, does not naturally detect the majority of the white light spectrum, our “selective absorption” reveals our limited sense of connectivity. Dana’s revolutionary music will open up a space to exercise the viewer’s extra spectral senses and expand their integration within themselves, as well as the world around them.

Prepare to be mesmerised with seven magnificent songs. Each with its own unique significance in the realm of other-worldly reach and scope.

Indigo: This is believed to be the colour of the third eye chakra. It is the colour of wisdom and represents a comprehension of your higher self.

Azure: Composed in blue to express depth and hope. In its most powerful emotional construct, blue is the space in which your reach is limitless.

Spectrum: This song intends to represent a greater variety in the ¨spectrum¨ of Crystalline. Its role in the album is to widen as well as deepen our sensory absorption.

Chromium: Is the trace element responsible for creating the colour red in the stone corundum, which produces a ruby. Red is that first impulse from the depths of your intuition and the pounding rhythmic force that propels you forward.

Glacier: This is the moment that is frozen in the present. In this space, the only thing that matters is the here and now.

Heliodor: The properties of this yellow stone is believed to illuminate the mind and promote a positive outlook and disposition. This song represents an awakening of the soul.

Harlequin: Is a reference to the colour between green and yellow green. Internally it is our most fertile environment, generating optimum conditions for creative growth.

Commenting on the upcoming concert, Dana Al Fardan, said: “To headline this extraordinary event is an honour. The performing arts scene in Qatar is packed with incredibly innovative artists, and I’m thrilled to be involved with D’reesha in helping to engage a new generation of talent in our communities.

“The concert will be an exciting and inspiring show,” she continued. “Indigo breaks the rules of “selective absorption”, and it works to connect the audience to their extra spectral senses.

“What we have created is a remarkable experience that encourages viewers to expand, and amalgamate with their surroundings and within themselves, on a much deeper level,” she added.

D’reesha Performing Arts Festival will be a year-round performance lab that aims to empower students. It will culminate in an annual festival that transforms Education City into an open stage.

In the long term, the unique multidisciplinary platform provided by Qatar Foundation will give the world a performance experience unlike any other. Some of Dreesha’s spotlight performances include Qatar Philharmonic Orchestra, Showtime production, and, of course, a very special performance by Dana Al Fardan.

Registration is required - it's free!