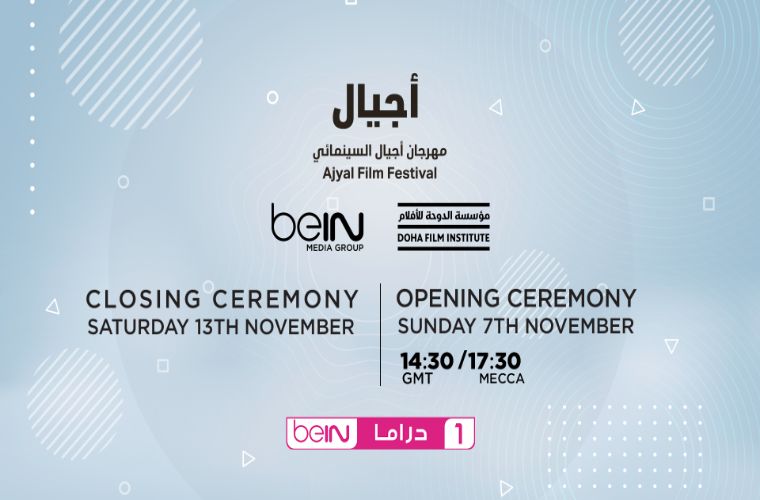 DOHA, Qatar – 06 November 2021: beIN MEDIA GROUP, the global sports and entertainment media group, has been revealed as one of this year’s Media Partner for Doha Film Institute’s (DFI) Ajyal Film Festival 2021 that will run from Sunday 7 - Saturday 13 November. The Festival, now in its 9th year, is designed to bring generations together through the magic of film and is an unmissable staple in the Middle East & North Africa (MENA) film scene.

Through this collaboration, beIN will broadcast live from the red carpet event at Katara Village, Qatar - direct from its specially-curated on-site studio, covering the Opening Red Carpet Ceremony (Nov 7, 17:30 MECCA) and the Closing Ceremony (Nov 13). beIN’s coverage of the week-long festivities will be available  in Arabic on both Jeem TV and beIN DRAMA. The duo, Presenter Marwa Khamis and Marianne Azzi, will be covering the event live throughout the week from the red carpet - interviewing the directors, attendees, and jurors, and bringing viewers all the behind-the-scenes action. There will also be a  special appearance from Anbar, the much-loved Jeem puppet, live from his very own puppet booth, interacting with the younger audience. beIN will also provide glimpses of the Ajyal Film Festival through daily snippets across its social media platforms, presented in English by beIN’s Nicky Crosby.

The Ajyal Film Festival features an incredible line-up of 85 films, including 31 new feature films and 54 short films. 32 of the films in this year’s Festival are produced and directed by women and 22 are from the Arab world, with 10 truly Made in Qatar. This culturally-rich collection represents a diverse array of content from across the MENA region and provides a powerful and much-needed platform for representation. What’s more, this year’s theme, Press Play!, celebrates the return of in-person events in the spirit of togetherness and the resilience of the nation in addressing the pandemic.

Commenting on the announcement, Mohammad Al-Subaie, CEO of beIN MENA, said: “We’re delighted to be supporting the Ajyal Film Festival once again this year .Our ongoing partnership with DFI demonstrates not only our focus on bringing world-class content to our viewers, but also our commitment to promote stories from this culturally-rich region by the many young and talented filmmakers that exists across MENA”.

The opening film of this year’s Festival, A Hero, by acclaimed two-time Academy Award® winning filmmaker and DFI collaborator, Asghar Farhadi, received a five-minute standing ovation at the Cannes Film Festival and also won the Grand Prize. For tickets to this year’s Ajyal Film Festival visit: https://my.dohafilminstitute.com/ajyal/films/. To subscribe to beIN, visit www.bein.com/en/subscribe/ and to ensure you never miss any action, download the beIN CONNECT app to enjoy the greatest sporting events and top entertainment movies and programs of all time on the go on your computer, mobile, and tablet.