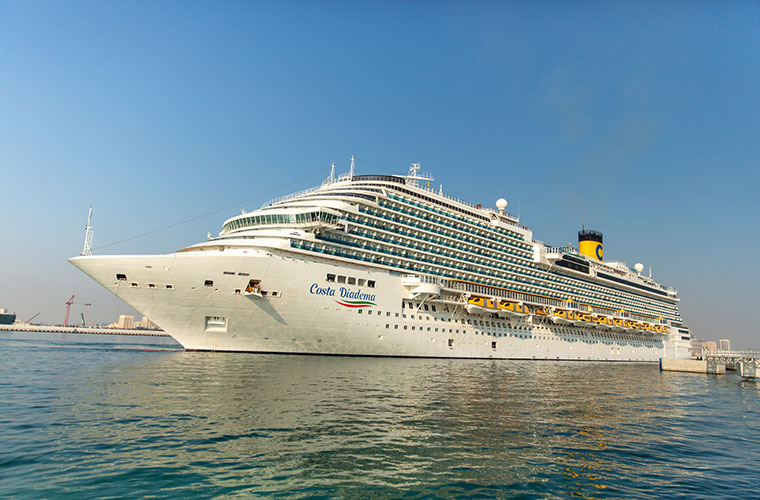 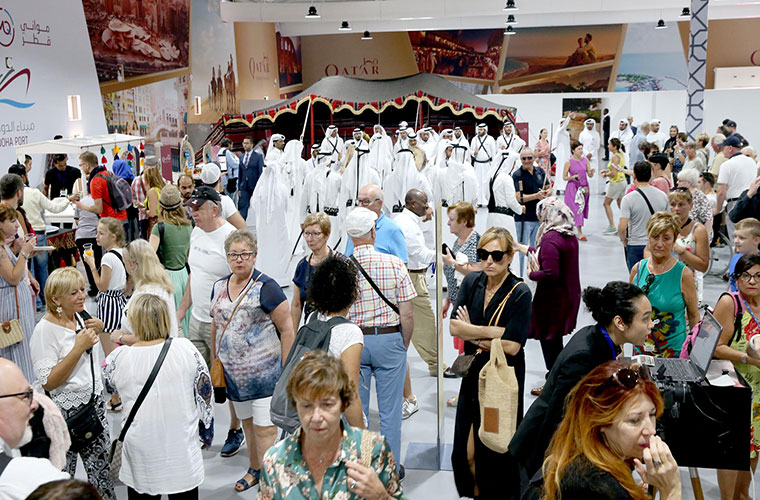 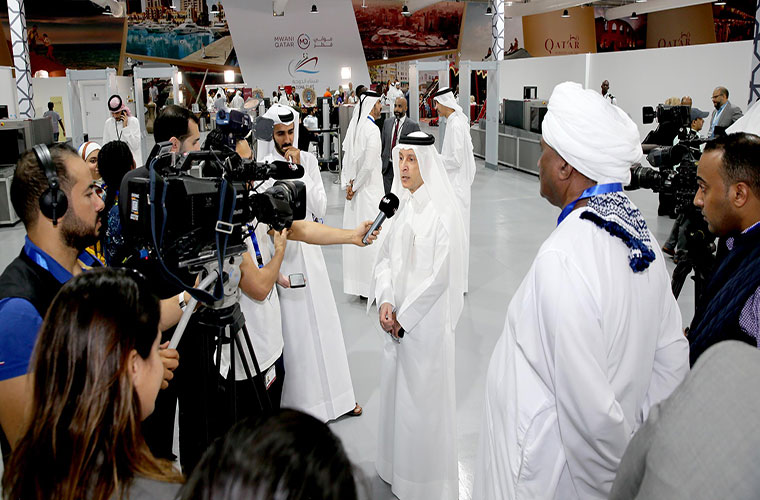 The arrival of Costa Cruises’ flagship marks its maiden trip and the first of 16 partial turnaround calls in which passengers will begin and end their journeys from Qatar
Costa Diadema, the fleet flagship of leading Italian company Costa Cruises, docked at Doha Port for the first time on Wednesday morning. The arrival marked the first of 16 turnaround calls that the Dream-class cruise liner will be making during the 2019-20 Season.
Doha’s emergence as a turnaround port marks a major milestone in the development of the country’s cruise tourism. For the first time, visitors can begin and end their journey from Doha and have the opportunity to enjoy Qatar’s five-star airline and award-winning hospitality before and after their cruises.
Officials including H.E. Mr. Akbar Al Baker, Secretary General of QNTC and GCEO of Qatar Airways; Ahmed Al Jamal, Chairman of the General Customs Authority; Captain Hassan Al Maqeef, Executive Vice President Commercial at Mwani Qatar, Rehan Ali, Executive Director of Al Tawfeeq Travels, and Rafi Ramashandran, General Manager of Inchcape, among others were present to receive the mega ship. H.E. Mr. Al Baker presented a plaque to the ship’s Captain Georgio Moretti.
On this occasion, H.E. Mr. Jassim bin Saif Al Sulaiti, Minister of Transport and Communications, welcomed the arrival of the cruise ship Costa Diadema to Doha Port, praising the strong partnership with Costa Cruises and looking forward to many years of fruitful cooperation to enable travelers and tourists to discover the rich heritage of the State Qatar’s and its exceptional hospitality.
H.E. the Minister of Transport and Communications, said, “Doha Port continues to help in positioning Qatar position as one of the most sought-after destinations among cruise travelers in the region, thanks also to the role played by National Tourism Council, the Qatar Ports Company and other stakeholders in providing distinguished services to cruise ships and the necessary facilities for their passengers.”
Turnaround voyages contribute significantly to the country’s economy and strengthen the tourism sector. In addition to visitor spending, the growth in Qatar’s cruise tourism is also contributing to the country’s economy through cruise line spending on port services and maintenance. As the cruise season grows year-on-year thousands of jobs and business opportunities are created.
H.E. Mr. Akbar Al Baker, Secretary General of QNTC and GCEO of Qatar Airways, said, “Receiving turnaround calls is a great milestone for our cruise tourism, that will support the hospitality, retail and aviation sectors as thousands of passengers spend time exploring Qatar. We’re particularly pleased that our cruise visitors can experience the excitement of regional and international sporting events taking place this season. Together with support from our partners in public and private sectors, including global partners like Costa Cruises, Qatar is on its way to become a distinctive cruise hub in the region.”
The arrival of Costa Diadema comes as a result of an agreement signed between QNTC and Costa Cruises in September last year to develop cruise tourism in Qatar, by building attractive packages and special services dedicated to Costa Cruises guests, in addition to joint communications, co-marketing actions and familiarisation trips. Following this agreement, Costa Mediterranea also made three voyages to Qatar earlier this year. With a capacity of 4,974 passengers and over 1,200 crew members on board, Costa Diadema is the latest addition to the fleet of Costa Cruises launched in 2014 and is currently the largest vessel flying an Italian flag.
“Costa Cruises was the first cruise company in the world to start regular cruises in the Arabian Gulf back in 2006. As a pioneer in the cruise industry, it is part of Costa DNA to constantly innovate its product, offering new features and destinations with the aim to deliver guests an unforgettable cruise experience. We are glad Costa Diadema is now operating in an increasingly interesting destination such as Qatar, which has a huge potential for the cruise industry and is a strong addition to the regional itinerary.”, said Neil Palomba, President of Costa Cruises.
Qatar has multiple advantages that make it a perfect turnaround cruise hub. The expanded network of Qatar Airways covering over 160 destinations worldwide provides visitors numerous options to suit the cruise itinerary (passengers from seven destinations in six countries across Europe were able to arrive in Doha this morning on board flights landing within a span of less than two hours). The passengers are further facilitated by the speedy immigration system at the five-star Hamad International Airport.
Running parallel to the cruise season is an exciting winter calendar of events featuring FIFA Club World Cup 2019 matches, music concerts by global artists and numerous retail, travel and hospitality promotions that the cruise passengers will be able to enjoy during their stay in Qatar.
As a result of various initiatives by QNTC and its partners, Qatar’s cruise industry has seen remarkable growth during the last few years. The 2018/19 season achieved 121% growth in the number of cruise passengers and 100% growth in the number of cruise ships, with over 140,000 passengers arriving aboard 44 ships, including 38 mega ships, which typically carry between 3,000 and 4,000 passengers and crew.
The 2019/20 season is expected to be even bigger, with over 186,000 passengers and over 61,000 crew arriving on 74 ships. Five ships will make their maiden calls to Doha this season. In addition to the 16 turnaround calls, it is also the first season where 9 ships will be staying overnight at Doha Port, giving the passengers ample time to explore the destination’s offerings. 45 ships are making transit calls during this season.