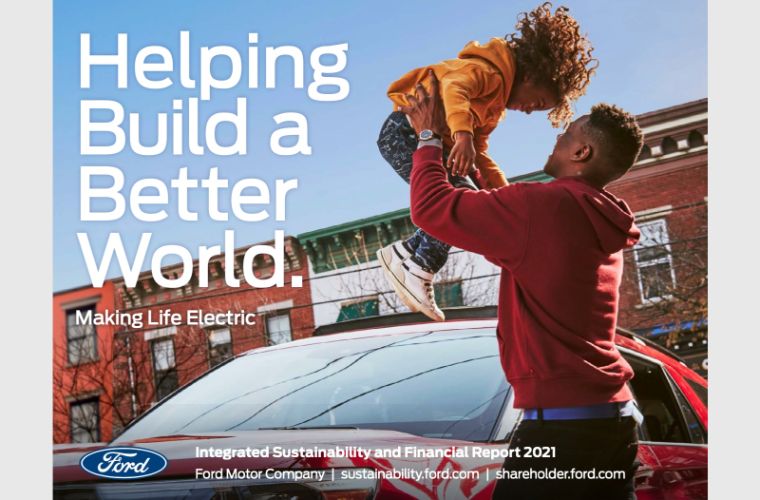 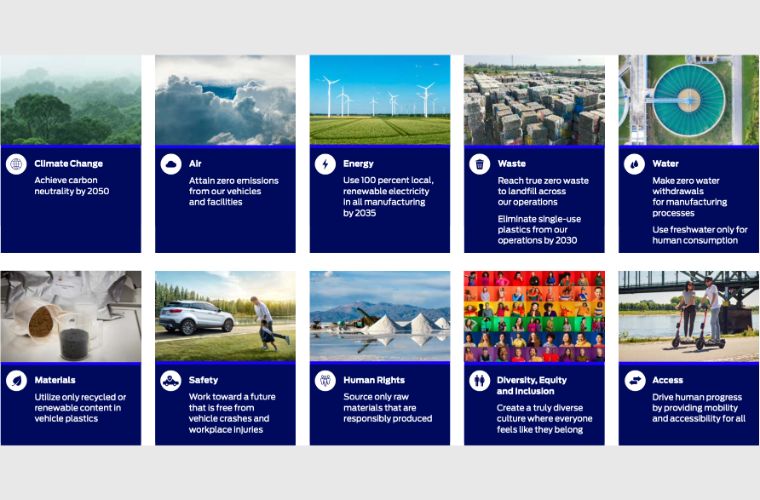 
Social contributions in 2020 included making millions of pieces of personal protective and medical equipment amid COVID-19 pandemic, and sharpening focus on diversity, equity and inclusion


Ford today released its first-ever integrated sustainability and financial report of accomplishments and aspirations, at the same time announcing new science-based targets toward the company’s ambition to be carbon neutral by 2050, in line with terms of the Paris Climate Agreement.

The targets – to reduce Scope 1 and 2 greenhouse gas emissions from operations 76% from 2017, and Scope 3 GHGs from use of the company’s products 50% from 2019, both by 2035 – were recently approved by the Science Based Targets initiative.  SBTi is a collaboration between CDP, the World Resources Institute, the World Wide Fund for Nature and the United Nations Global Compact that helps companies set meaningful objectives for mitigating emissions.

Reducing emissions has favorable implications for a range of sustainability issues that Ford stakeholders have said matter most – all of which get attention in the newly issued report.

Combining sustainability and financial performance in a single report, Ford said, is significant.

“Combining those topics in a single report reflects that, more than ever, investors and other stakeholders want to know not only what you plan to do, but what you’re accomplishing and how you’re managing risks along the way.”

Highlights in the integrated report include Ford’s large-scale social response to the COVID-19 pandemic; significant investment in and initial launches of high-volume, zero-emission electric vehicles; and actions to protect human rights and create greater diversity, equity and inclusion within the company.

In addition to keeping each other safe amid COVID-19, in part by shutting down and then responsibly restarting worldwide manufacturing operations a year ago, Ford people have gone to great lengths to address social needs created by the global pandemic.  Through its “Project Apollo,” the company has developed, made and delivered vital medical and personal protective equipment – often in conjunction with the UAW in the U.S.

In Europe, the Ford Fund provided almost $500,000 to nonprofit organizations to support relief efforts linked to food provision, medical equipment and protective clothing, and other needs.  Ford U.K. turned an empty warehouse into a production line to make key components for 11,700 Penlon ventilators produced during the VentilatorChallengeUK.

Separate from the virus, broad social support provided by the Ford Fund during the course of 2020 was as varied as meal programs in places like Detroit and Bangkok, emergency-relief funds to Hispanic and historically Black colleges and universities, and grants to Black and Latina entrepreneurs and small-business owners.

Electrifying the Future, Clearing the Air

Through 2025, Ford plans to invest more than $22 billion to engineer and introduce connected, electric vehicles – including EV versions of some its most popular nameplates, in categories where millions of customers already rely on the company:  pickup trucks, commercial vehicles and SUVs.  Shipments of the highly anticipated Mustang Mach-E in North America began in 2020, followed by Europe in early 2021 and, later this year, in China.  All-electric Transit commercial vans will be introduced toward the end of 2021; a battery-electric F-150 is scheduled for launch in 2022.

To expand production capacity for EVs, Ford in 2020 started construction of the new Rouge Electric Vehicle Center in Dearborn, where the all-electric F-150 will be built.  In February 2021, the company announced a $1 billion investment to create the Ford Cologne Electrification Center in Germany.

Investments in Dearborn and Cologne manufacturing – together with another $1 billion announced in February to transform operations in Pretoria, South Africa – will further help reduce Ford’s overall carbon footprint.  Through improved energy efficiency and conservation initiatives, Ford today generates 40% less carbon from its facilities and manufacturing processes around the globe.  An additional goal is to use 100% locally sourced, renewable electricity at all Ford plants by 2035.

“We will lead in achieving carbon neutrality because it’s the right thing for customers, the planet and Ford,” said Bob Holycross, vice president, Sustainability, Environment and Safety Engineering. “Ninety-five percent of our carbon emissions today come from our vehicles, operations and suppliers, and we’re tackling all three of those sources with urgency and optimism.”

Holycross said that Ford will win as a team where “everyone belongs, in a culture that values diversity and encourages new thinking.”  Informed by its first comprehensive diversity, equity and inclusion audit of its U.S. salaried employees in 2020, he said, Ford acted to promote DEI, as examples:

Establishing programs to develop the DEI capabilities of managers, and

Attention to DEI at Ford is not new.  For several years, the company has put a premium on recruiting people from underrepresented groups.  Together with other steps, Ford is increasing the number of professional organizations and historically Black colleges and universities with which it works to attract diverse candidates.

The company’s DEI efforts are gaining outside attention, including recognition by Bloomberg’s Gender-Equality Index for three straight years and from groups like Rainbow Push, Disability Foundation Index, Hispanic Association of Corporate Responsibility, and Military Times.

Ford’s commitment to human rights is embodied in its newly published “We Are Committed to Protecting Human Rights and the Environment Policy.”  The company produced a supplier code of conduct in early 2021, outlining expectations and standards for its supply chain partners, and also became the first American automaker to join the Initiative for Responsible Mining Assurance for responsible sourcing of raw materials.  In 2020, Ford earned the top ranking in the Corporate Human Rights Benchmark’s first assessment of the automotive sector.

Ford’s full integrated sustainability and financial report, along with extensive related information, is available at sustainability.ford.com and shareholder.ford.com