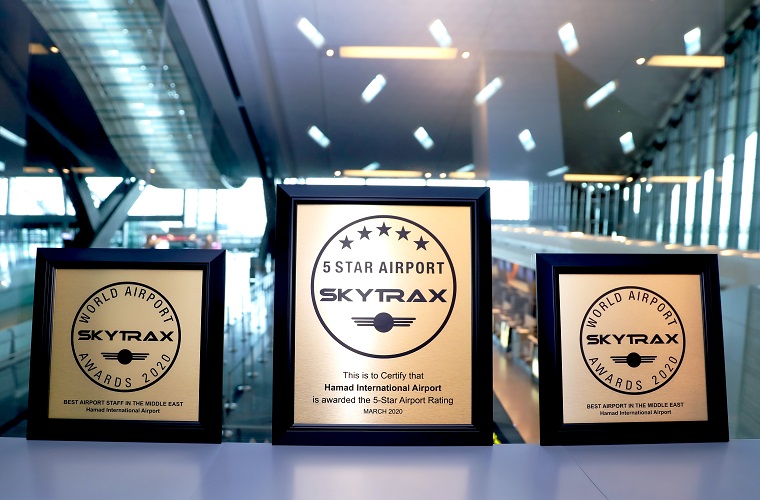 
Hamad International Airport (HIA) has been ranked the “Third Best Airport in the World”, among 550 airports worldwide, by the SKYTRAX World Airport Awards 2020. Rising from fourth position in 2019 to third in 2020, HIA has been steadily rising in the ‘World's Best Airports’ rankings since the start of its operations in 2014.

Engr. Badr Mohammed Al Meer, Chief Operating Officer at Hamad International Airport said: “Every year that we move up the ranks is particularly rewarding as this honour comes directly from our passengers who have shared their experiences travelling through our airport through SKYTRAX surveys. Despite all the challenges that the aviation sector faces today, we are committed to our primary role of helping travellers reach their home countries safely”.

Edward Plaisted, CEO of Skytrax said: "Hamad International Airport continues to achieve a top position as leading, global hub airport and the staff and management should be delighted by this recognition from customers. In 2020, Hamad International Airport for the first time moved into the top 3 worldwide airports, which is a fabulous achievement."

Aside from an excellent third position in the global ratings, the airport had success in numerous other worldwide product and service categories such as transit airport (3rd), immigration processing (10th), baggage delivery (10th), terminal cleanliness (5th), and leisure amenities (7th). Doha Hamad was also the best overall airport serving 30 to 40-million passengers.

In addition, HIA has been voted the ‘Best Airport in the Middle East’ for the sixth year in a row and ‘Best Staff Service in the Middle East’ for the fifth year in a row. HIA also continues to retain its five-star airport classification since 2017. These achievements are a result of the hard work and determination demonstrated by the airport staff, to make HIA the 'world’s fastest growing airport'. HIA’s rankings are also a result of its operational excellence. During 2019, the airport served a record 38,786,422 passengers, the most since the airport began operations in 2014.

Qatar’s airport invests in upskilling its people and building local talent. HIA recently launched ENJAZ, its national talent development programme created to grow, nurture and build its talent. The programme focuses on training and developing nationals in order to meet their role requirements in various departments of the airport to enhance job performance and build expertise, in cooperation with associations in the field of aviation, in addition to prestigious local and international educational institutions to provide expanded development plans for national cadres.

Engr. Badr Mohammed Al Meer added: “The world faces unprecedented challenges due to the spread of Corona virus, and we are sure that the crisis will be overcome only through comprehensive cooperation between all concerned parties and civil society in preserving the safety and security of all. Our award for "Best Staff Service in the Middle East" and “Best Airport in the Middle East" will reinforce our resolve to continue our operations in these difficult times with our utmost care to implement all measures to ensure the health and safety of our passengers and employees first."

HIA recently announced a 4.7 per cent increase in cargo operations in the first quarter of this year, primarily attributed to Qatar Airways’ and HIA’s continued efforts to provide freighter services in response to the increased demand for essential goods and medical supplies, locally and internationally. This includes the transportation of urgent medical relief aid and humanitarian assistance, which is pivotal to the global fight against the COVID-19 pandemic.


The SKYTRAX World Airport Awards represent the passengers’ choice when it comes to airports they are inclined to travel through.  With passengers at the heart of the airport’s strategy, HIA has been investing in cutting edge smart technologies, automation and self-service, as part of its smart airport vision.

HIA commenced its airport expansion project earlier this year. Phase A of the expansion will increase HIA’s capacity to more than 53 million passengers annually by 2022. Phase B which will increase the airport’s capacity to more than 60 million passengers annually. Designed to seamlessly integrate with the existing terminal, the expansion building will aim to be the first in the MENA region to achieve a four-star Global Sustainability Assessment System (GSAS) rating. The terminal expansion will also target to be a LEED Silver certified energy efficient building. The tropical indoor garden and water feature will allow passengers to benefit from the calming effects of nature.

The World Airport Awards are the most coveted quality accolades for the airport industry, often referred to as "the Oscars of the aviation industry" and are a global benchmark of airport excellence. Travellers across the globe take part each year in the world’s largest airport passenger satisfaction survey to decide the winners. Skytrax Survey and Awards Methodology is fully transparent, and the processes remain 100 per cent independent with no payment by any airport or other outside organisation for any aspect of the customer survey or Awards presentation event.