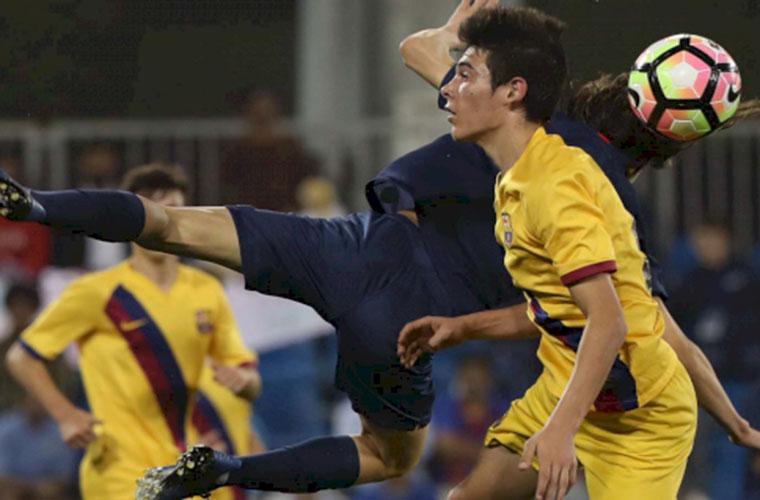 Barca, making their third appearance at the world-class youth tournament, have failed to reach the semi-finals in any of their visits to Doha.

The Spaniards have a great pedigree for producing world-class home-grown talent and their approach play was impressive against both Kashiwa Reysol and PSG but they ended up bottom of Group B with just one point.

Ilyes Housni had the first effort on goal after 12 minutes but goalkeeper Ander Astralaga, brought into the side after spending the opener on the Barcelona bench, was untroubled.

Barca skipper Alex Garrido then tried his luck with a low drive but couldn’t get it on target. His effort came during a good spell, who had worked their way into the match after a positive start by the Parisians.

As Barca pressed for the opener Jan Coca hit the post with a low right-foot drive but PSG quickly broke up the other end and thought they should have had a penalty when Housni went down, but Mohsen Yaqoub Darwish ruled that contact was minimal.

Jordi Coca, twin brother of Jan, was finding room down the right and he sent one shot across goal and then fired into the side netting just minutes later.

Barca enjoyed a strong finish to the half but were stunned by a PSG counter attack that saw them take the lead in the first of two minutes added on. Housni burst through the Catalan defence to get on the end of Ismael Garbi’s through ball and sent a sublime lob into the net.

It was harsh on Barca, who had enjoyed 58% of the possession in the first half and had also had more shots than the French side.

Substitute Pascal Lemina made a great burst into the box at the start of the second half, showing great skill but not managing to find the finish that his build-up play deserved. Enzo Tayamoutou also went agonisingly close when bursting into the box and sending a curling shot just wide of the post.

Barca then found the net on 70 minutes but it was ruled out for offside. Jordi, who had earlier seen an effort well saved, flicked a superb ball between two French defenders and skipper Aleix finished well only to see his effort correctly ruled out.

Housni went close to his second two minutes later but Astralaga saved well with his legs. A goal would have left Barca needing to score at least three goals to qualify but they did grab a well-worked equalizer on 74 minutes. Pol Munoz sent a superb ball inside PSG left-back Vimoj Mungu and Jordi raced onto it to beat the keeper to send it into the net.

PSG went back in front when Tayamoutou scored on 81 minutes following a fine dummy by Gharbi but Barca levelled again four minutes later when 13-year-old Warren Zaire Emery brought down the impressive Jordi and the referee pointed to the spot. Alexei coolly sent Louis Mouquet the wrong way from the spot to set up a dramatic last five minutes.

Lemina should have given PSG victory with the final touch of the match when bursting clear, but his failure to hit the target mattered little as the Parisians still topped the group.