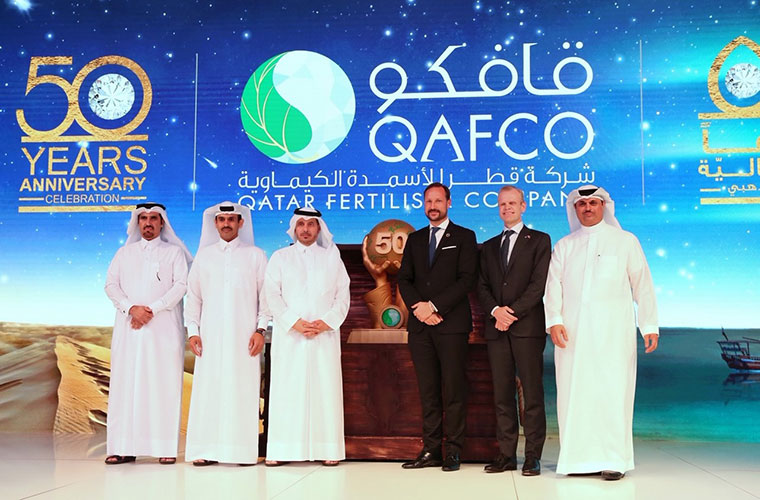 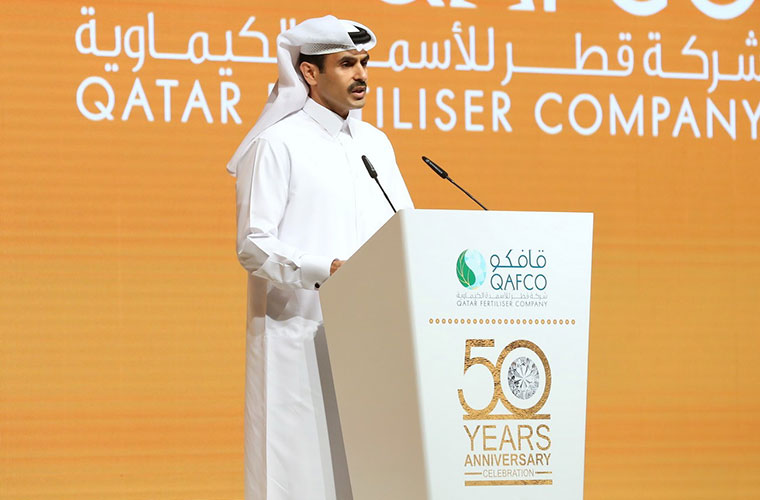 Qatar Fertiliser Company (QAFCO) celebrated its 50th anniversary since establishment and five decades of an international reputation as a premium manufacturer and supplier of high quality urea.
A special celebration was held at the Qatar National Convention Centre, under the patronage and in the attendance of His Excellency Sheikh Abdullah bin Nasser bin Khalifa al Thani, the Prime Minister of the State of Qatar. The event was also attended by His Royal Highness Crown Prince Haakon of Norway, and His Excellency Mr. Saad Sherida Al-Kaabi, the Minister of the State for Energy Affairs, President & CEO of Qatar Petroleum, along with senior Qatari and Norwegian executives and officials.
Speaking at the event, His Excellency Mr. Saad Sherida Al-Kaabi, the Minister of State for Energy Affairs, reviewed Qatar's achievements over the past five decades in the energy sector in general and the petrochemical industry in particular. He said, “QAFCO was the first building block in Mesaieed Industrial City, and the first Qatari petrochemical manufacturer to export its products from Mesaieed port to the world, in addition to being the first company to train and develop Qatari human potential to work in and lead the petrochemical sector.”H.E. Minister Al Kaabi added, “QAFCO is a cornerstone in Industries Qatar, the largest listed company on Qatar Stock Exchange, which has benefited the national economy. This was followed by the establishment “Muntajat”, an experienced Qatari market leader in the marketing of petrochemical products, which is exclusively responsible for the marketing of QAFCO's products throughout the world.”
H.E. the Minister of State for Energy affairs pointed to the role of joint ventures in advancing the national economy and said, “Joint ventures are not only to provide investment opportunities, expertise and resources, but also to contribute significantly to growth and sustainability, in line with Qatar National Vision 2030, which was launched and guided by His Highness the Amir, with the aim of transforming aims at transforming Qatar into an advanced country by 2030, capable of sustaining its own development and providing for a high standard of living for all of its people for generations to come. Based on this, we are placing the highest priority on the development of Qatari nationals, the prudent management of our hydrocarbon resources, the well-planned and diversified investment, and on ensuring to carry out our projects out in accordance with the highest environmental standards”.
QAFCO is amongst the first petrochemical enterprises in Qatar established by the Government of Qatar, Norsk Hydro, The Power-Gas Corporation Ltd and Hambros Bank Ltd in 1969.  Today the ownership is shared 75/25 between Qatar Petroleum and YARA International ASA. QAFCO’s annual production capacity is 5.6 million metric tonnes of urea and 3.8 million metric tonnes of ammonia which are marketed and sold exclusively by Muntajat. QAFCO worldwide is recognized as the largest single-site fertiliser plant and is about 14% of the world’s traded urea; it is the largest single site producer of urea in the world and represents a significant percentage of the world’s traded supply.
QAFCO also established Gulf Formaldehyde Company (2003) and Qatar Melamine Company (2006); further supporting the State of Qatar’s industrial diversification strategy.