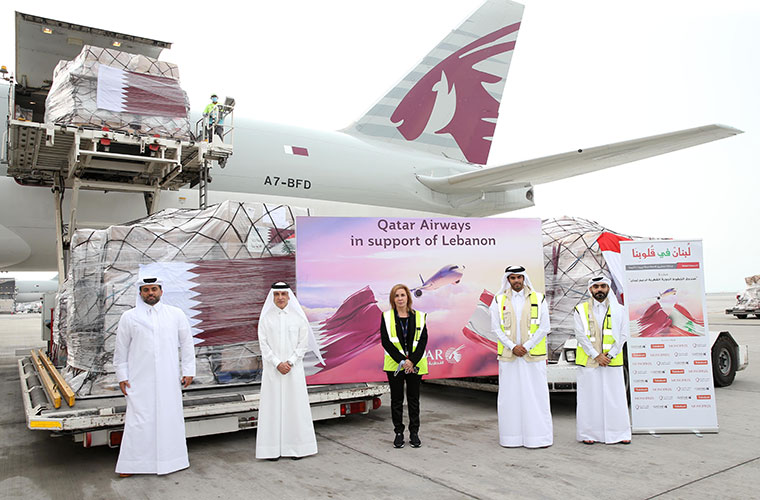 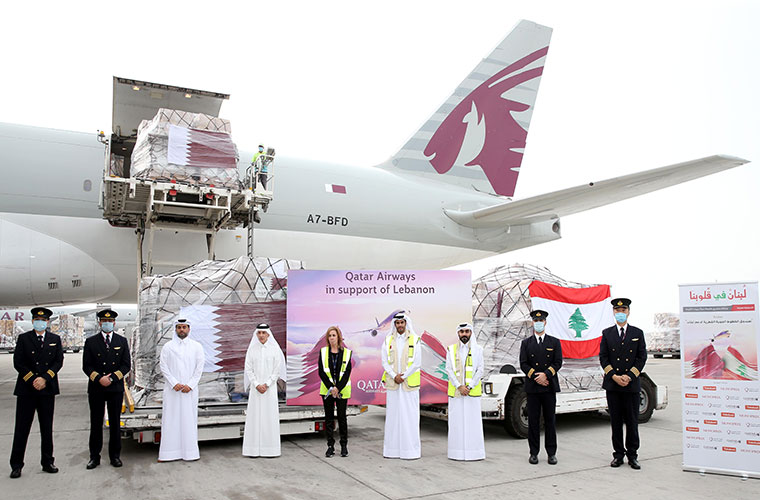 Qatar Airways in partnership with Qatar Charity and Monoprix Qatar - member of Ali Bin Ali Holding, has launched an aid programme that will enable to citizens and residents of Qatar to donate food and other essential supplies to Lebanon following the tragic events in Beirut last week.

Until 11 August, Qatar citizens and residents can purchase items from Monoprix Qatar’s store on Talabat under the section ‘Qatar Airways Box for Lebanon’. Monoprix Qatar and Talabat will then arrange to deliver the ordered boxes to Qatar Airways Cargo at Hamad International Airport (HIA). Donated boxes of essential supplies will be shipped free of charge on special freighter flight at the end of this week. The donations will be distributed on the ground in Lebanon by Qatar Charity.

Qatar Airways initially launched this aid programme on Thursday to its Doha-based employees. However, due to an overwhelming response from employees, who have donated a large volume of supplies over the weekend, the airline has extended the programme to members of the public in Qatar.

The aircraft was received upon landing in Rafic Hariri International Airport by Ambassador of Qatar to Lebanon, His Excellency Mr. Mohammed Hassan Jaber Al Jaber, as well as a number of senior officials.

His Excellency Mr. Akbar Al Baker said: “Our thoughts and prayers are with the people of Lebanon during this tragedy. Beirut has always shown strength and resilience and we strongly believe this beautiful city will recover. In such difficult times, it has been touching to see so many of our employees at Qatar Airways wanting to offer their support to the people of Lebanon. With so many donations received in just 48 hours from our people alone, I hope that we can send an even bigger shipment later this week. I would like to take the opportunity to thank our partners in this programme – Ali Bin Ali Holding, Qatar Charity, Monoprix Qatar, and Talabat. It is great to see the community come together to support our brothers and sisters in Lebanon.”

Ms. Farah Berri said: “On behalf of Lebanon, I extend my deepest thanks to His Highness Sheikh Tamim Bin Hamad Al Thani and to Qatar Airways, represented by His Excellency Mr. Akbar Al Baker, and all its employees for your unrelenting support of Lebanon and its people during these horrific times. Qatar has always stood next to Lebanon and has helped it overcome difficult and turbulent times. From my heart to yours, we thank you.”

Vice-Chairman & EVP of Ali Bin Ali Holding, Mr. Nabeel Ali bin Ali, said: “We are happy to unite our efforts for such a noble cause and affirm our commitment and support to Lebanon during this tragedy. We continue to support humanitarian causes through such inititives in cooperation with our partners and the local community. Lebanon is facing an unprecedented crisis and it is essential that we all come together to support the country and its people.”

Mr.Faisal Al-Fahida, Assistant CEO for International Operations and Partnerships Sector at Qatar Charity, said that in the framework of coordination between Qatar Charity and Qatar Airways, a relief plane carrying food and medical supplies headed to Lebanon. He added that Qatar Charity office and local executive partners in Lebanon will be welcoming the plane to distribute aid to families affected by the Beirut Port explosion, to complement the field assistance that Qatar Charity began to provide to the Lebanese people”.

Qatar Airways currently operates double-daily passenger flights from Doha to Beirut, which offers more than 160 tonnes of cargo capacity each week, each way. Throughout the COVID-19 crisis, Qatar Airways Cargo’s network has never fallen below 66 destinations, helping transport essential supplies around the world through belly-hold cargo on passenger flights and freighters. It continued to operate its scheduled freighters throughout the crisis, while also operating more than 500 freight charters of relief goods, personal protective equipment and medical aid to impacted countries.

Over the past few months, the cargo carrier has also worked closely with governments and NGOs to transport over 250,000 tonnes of medical and aid supplies to impacted regions around the world on both scheduled and charter services. This equates to roughly 2500 fully loaded Boeing 777 freighters.

The world’s largest cargo airline is also committed to helping people in need through its recently introduced ‘1 Million Kilos’ campaign, part of the We Qare project. From July to the end of December, charities will be able to use the services of Qatar Airways Cargo to transport humanitarian aid and medical supplies all over the world, free of charge.