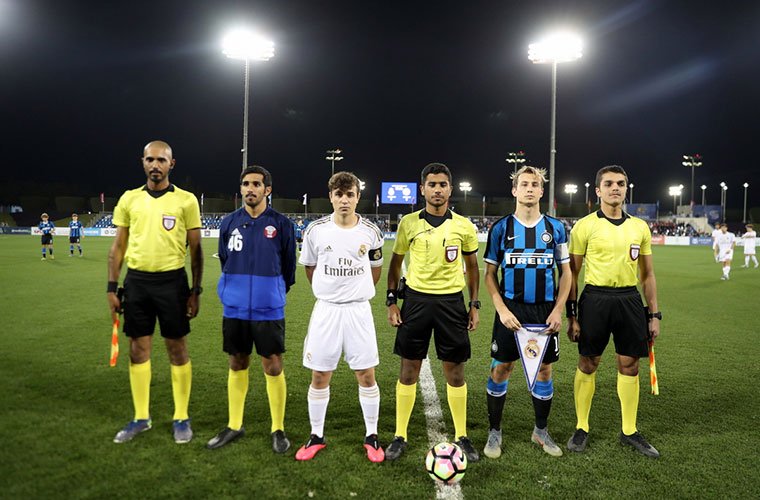 Real Madrid produced a dominant display to regain the Al Kass International Cup, with a stunning 5-0 victory over Inter Milan at Aspire Academy.

Inter had only conceded four goals all tournament prior to this final, but that figure had doubled inside an hour as 2017 champions Real created wave after wave of attack to entertain a big crowd.

The Spaniards were supreme as they recorded the biggest winning margin ever in an Al Kass International Cup final, as they took the number of goals in the tournament to 120, 13 more than the previous best.

Real netted three times during the first half, which saw them enjoy 61% possession and have 13 attempts on goal – while the Italians failed to muster a single shot.

The opening 25 minutes were tight, though, and seemed to be going the way of most previous Al Kass finals as Inter’s impressive defensive capabilities kept the Spaniards at bay.

But once Yeray Lancha broke the deadlock it was one-way traffic. Linking up with player of the match David Pecellin (Pece), Lancha fired home a powerful shot for his third goal of the tournament.

Having provided an assist just minutes earlier, Pece forced a fine save out of Paolo Raimondi and Real added two more before the break.

Their second goal on 37 minutes was a disaster for defender Lorenzo Peretti, who had played a major role in their semi-final victory over PSG. Pece beat two defenders but his shot was going wide until Peretti sent a miscued clearance into his own net.

Two minutes later Abraham sent a brilliant dipping shot into the net and Pece, Marc Cucalon and Abraham all had further efforts on target as Inter struggled to contain them. Lancha also lashed an effort against the post as rampant Real turned on the style.

Real continued to entertain after the break and Lancha showed great skill before feeding Abraham who shot narrowly wide. Abraham had more joy when he sent a beautiful lob over the keeper for Real’s fourth on 58 minutes, and Pece almost added another but his effort hit the post.

Raimondi, who enjoyed an excellent tournament, pulled off a fine point-blank save to deny Ekaitz Redondo after fine approach play by the classy Lancha.

At the other end, Tommaso Clerici had two efforts on goal but couldn’t find a way past Real keeper Guillermo Sunico.

Pece went close with a free-kick in the final 10 minutes and he then put the ball into the net only for his effort to be ruled out for offside.

There was still time for a fifth Real goal though as Gonzalo Garcia crossed for Redondo to head home from close range.

Real enjoyed a massive 63% possession and had 22 shots compared to the seven by Inter, as they regained the trophy in style.

As well as keeping a clean sheet on the night, Sunico received the Golden Glove award for best goalkeeper in the post-match presentations, while Igor Kozlov (Zenit) and Charlie Lindsay (Rangers) finished as the tournament’s top scorers with six goals apiece.

Lindsay was named player of the tournament, having also picked up for player of the match awards, while Kashiwa Reysol received the fair play award having received just one yellow card.

But the biggest cheers were for the magnificent Real squad who deservedly lifted the trophy. Having gone into the final as the only unbeaten team, they leave Doha with hopes of going on to become first team favourites at the Bernabeau Stadium.