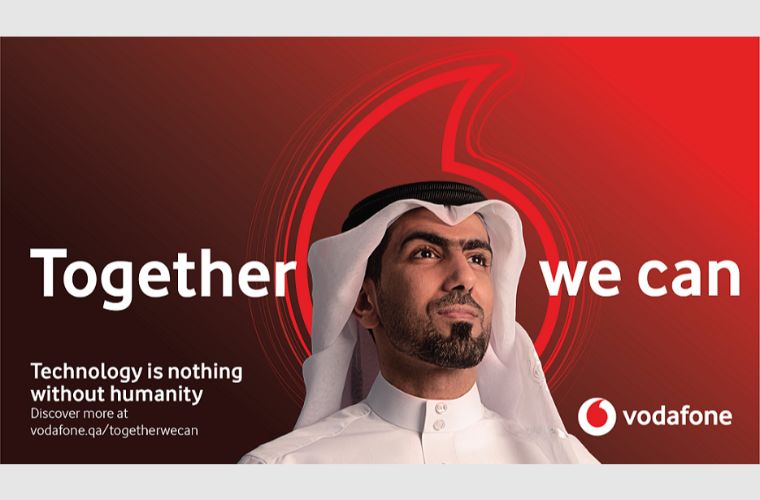 TOGETHER WE CAN: VODAFONE QATAR CELEBRATES COLLABORATIVE POWER OF TECHNOLOGY AND HUMAN AMBITION WITH NEW BRAND POSITION

Vodafone Qatar celebrates what the human spirit can achieve when combined with technology in an update to the Vodafone brand position, being introduced in Qatar tomorrow (4th April). The company will introduce a new Vodafone tagline - ‘Together We Can’ – to accompany its new position, as well as launch an advertising campaign demonstrating Vodafone’s profound belief that the partnership between technology and society can build a better future.

“Together We Can’ places the emphasis on ‘we’, and how collaboration between the human spirit and innovation can achieve great things,” says Diego Camberos, Chief Operating Officer, Vodafone Qatar. “The experience of these last 12 months during the COVID-19 crisis has demonstrated more than ever the critical role of connectivity and technology to keeping society, businesses and governments connected. As a purpose-led company, Vodafone Qatar fundamentally believes that technology can improve lives, and this new positioning builds further momentum to our purpose to connect for a better future and enable an inclusive, sustainable digital society.”

Vodafone’s new brand position is inspired by consumer research carried out by the company which revealed that the role of technology is profoundly transforming in people’s lives. Findings identified how technology has evolved from something that simply excites people on a personal level, to playing a more meaningful part in the world at large, in particular, in making a difference on issues such as sustainability and societal development. Over the coming months, Vodafone’s Together We Can message will be further reinforced and set in motion by the company’s deployment of GigaNet networks enhancing connectivity for people and businesses in Qatar, and supporting education, health and wellbeing to create a more inclusive and sustainable society.

The Together We Can campaign poses questions on the role technology can play in curing disease, fighting climate change and addressing digital inclusion. A series of stories will appear in digital advertising that shine a spotlight on Vodafone’s critical role to help answer these questions, from the rollout of GigaNet 5G and Fibre networks and connectivity to the most remote parts of Qatar and the world, to the role of the Vodafone Group DreamLab app in the global fight against cancer and COVID-19.

The campaign will mark the introduction of a refreshed brand identity with Vodafone’s iconic Speechmark logo and red colour scheme. In addition to Qatar, the programme will run in over 30 markets including Germany, Spain, the UK, Italy, Romania, Greece, Ireland, Hungary, Albania, the Netherlands (via Vodafone-Ziggo), Portugal, Czech Republic, Turkey, Australia, South Africa, Ghana, Democratic Republic of the Congo, Tanzania, Lesotho, Mozambique and New Zealand. Creative work for the Together We Can campaign was produced by the London-based New Commercial Arts agency.