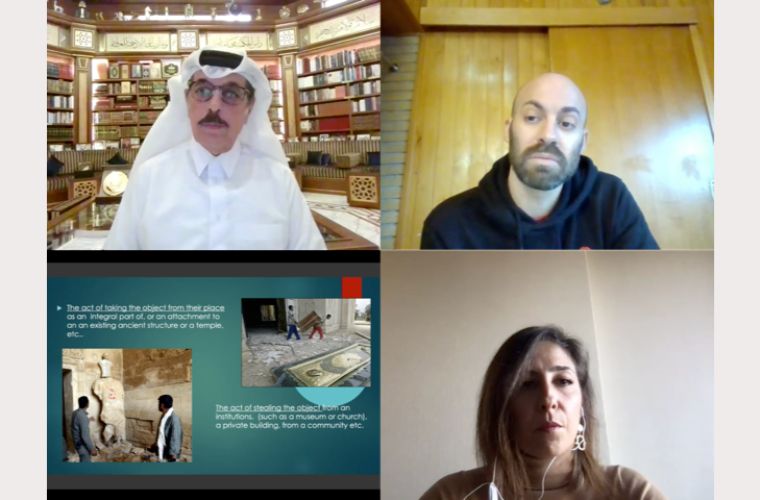 Qatar National Library, in its role as the IFLA Preservation and Conservation (PAC) Regional Center for Arab Countries and the Middle East, held a special event this week bringing organizations together to counter the trafficking of cultural artifacts in the region.

The two-day webinar, titled “What is Antiquities Trafficking?” took place on 7 – 8 February. The event discussed the structures of supply chains for the illicit trade of cultural items, identified key stakeholders involved in the criminal practice, and explored the sources, transit routes and market countries of the illegal activity.

The webinar was part of the Himaya Project Lecture Series, an initiative the Library launched to counter the trafficking and illegal circulation of documentary heritage in the MENA region and neighboring countries. Himaya engages international agencies and regional organizations to protect heritage artifacts and thwart the trafficking of such items.

The speakers analyzed case studies from Iraq and Syria to illustrate the different aspects and key features of antiquities trafficking and its transnational nature.

“For centuries, the Arab and Middle East region has been a melting pot of civilizations that produced many artifacts with historical, spiritual and aesthetic values, not to mention the pride and respect of their owners and custodians.

“The trafficking and smuggling of antiquities is certainly not a new phenomenon, and activity has been rising in recent years. In the MENA and West and Central Africa regions, trafficking of such items is greater due to conflict and insecurity—notably in countries such as Chad, Iraq, Libya, Mali, Niger, Syria, Sudan and Yemen. It may often be linked to the activities of criminal and terrorist groups, who use it as a means to increase their income and launder money.

“Trafficking of such items is a robbery of the rights of peoples, a falsification of the history of nations, and a removal of their heritage and identity. While criminals make significant profits from this illicit trafficking, humankind is denied access to archaeological information and artifacts of its shared heritage.

“It is vital that the international community acts to correct and restore rights to the owners. We believe that people everywhere in the world have an ethical role in this issue, and I hope this seminar played a part in shedding further light on the trafficking of antiquities and in contributing to the scientific and equitable solution of the topic. Cultural property is part of the common heritage of mankind, and it is in everyone’s interests that we develop a framework to preserve cultural heritage in our region and further afield.”

“This heritage of the Arab region and the number of impoverished and conflict-affected nations has led to increased trafficking and smuggling of antiquities and artifacts in the region, threatening its cultural heritage. Professionals must act to spread awareness about antiquities trafficking and help law enforcement to counter this illegal activity.”

“The international organizations in charge of countering the trafficking of artifacts have tended to focus on the illegal circulation of archaeological and artistic items. However, more also needs to be done with respect to documentary heritage, which is even more at risk because it is less protected by national legislation and is easier to move illegally.”