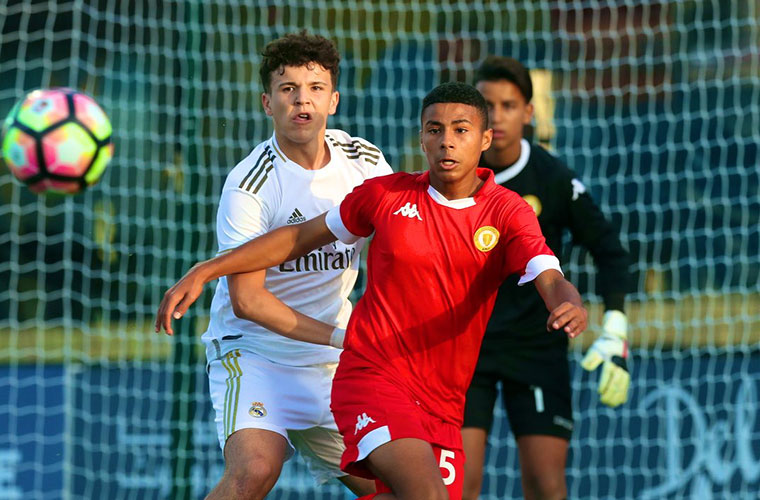 Real dominated the game and should have won inside 90 minutes but they found Mohammed keeper Walid Hasbi in inspired form.

The 2017 champions had been in high-scoring form throughout the tournament but found the Moroccans difficult to break down, and they had to wait until the 53rd minute to find the net when substitute Mario Martin fired home after great work by David Pecellin (Pece).

Real had a good opportunity on five minutes when Yeray Lancha sent skipper David Jimenez away down the right and ran into the box looking to get on the end of the cross. Jimenez’s delivery didn’t find his team-mate but Abdellah Baallal failed to control the ball and it fell to Lancha who fired narrowly wide.

Samuel Expositio went on a run after 17 minute and let fly with a right-foot effort that seemed destined for the net but crept just past the post.

Real won a free-kick just outside the box midway through the first half when Ayoub El Hammami brought down the skillful Lancha and Hasbi was forced to tip Nico Paz’s dipping shot over the bar.

Mohammed VI Academy had a free-kick of their own shortly afterwards but Hassan Aqboub, who starred in the quarter-final victory over Glasgow Rangers, couldn’t get on the end of Yassine Khalifi’s curling delivery.

Pece was causing problems down the left and he produced two quality crosses in as many minutes, the second of which produced the opening goal of the game.

He found Abraham Nobrega, who saw his effort well saved by Hasbi, but on their next attack Real finally made the breakthrough. Pece again got past his man and found Mario who fired home with a low drive.

Mario, who had only been on the pitch for eight minutes, became Real’s ninth different goalscorer of the tournament.

Hasbi continued to keep Mohammed in the game with a series of saves and he denied Abraham again following a fine run by defender Manuel Serrano.

Mohammed had enjoyed a much better second half though and they stunned Real with an equaliser on 88 minutes when Oussame Lyakoubi swept in a deep cross and Salah Cheffani rose well to head home.

Khalifi was sent off for a reckless thigh-high challenge on Marc Cucalon and Cheffani could have seen red immediately afterwards for another poor tackle a minute later but he escaped with a yellow card.

Guillermo Sunico was in fine form for Real in the shoot-out, keeping out Aqboub’s opening penalty for Mohammed VI Academy and then saving from Cheffani but being deemed to have left his line and the referee demanded a retake.

Real scored from all five of their spot-kicks to take the honours with Mario – who thought he was going to be the hero in 90 minutes – smashing home the match-winning penalty.

How the Penalty Shoot-Out Went