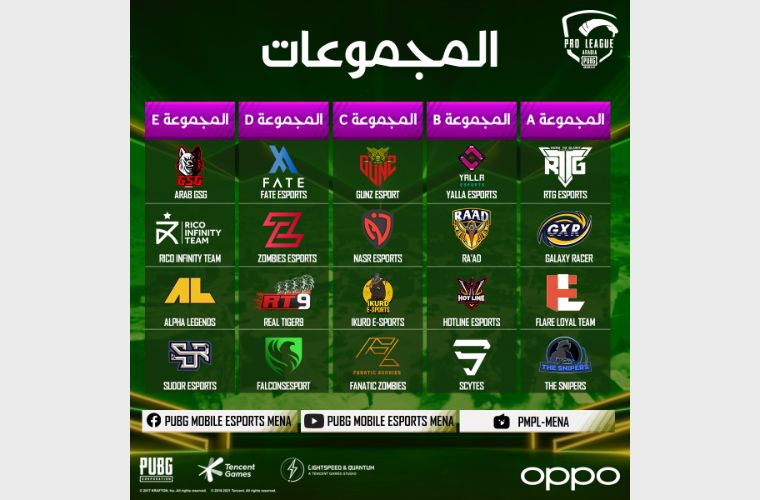 PUBG MOBILE Pro League Arabia (PMPL ARABIA) Season 1, the first ever official professional-level PUBG MOBILE tournament for the Middle East has kicked off, pitting some of the best pro Esports teams in competition for a share of a massive $150,000 prize pool.

Twenty Esports teams will compete over four weeks, battling it out in the world’s most popular mobile game, PUBG MOBILE, for a spot in the finals and a chance to progress to the EMEA Championship in June.


PMPL Arabia Season 1 is the first official PUBG MOBILE pro-level tournament for the region. The competition has been launched as part of the international expansion of PUBG MOBILE’S Esports ecosystem, and to encourage the expansion and growing professionalism of the Esports scene in the Middle East.

The tournament began on 17th May and will see each of the 20 teams compete in a weekly round-robin contest on Mondays and Tuesdays, with the best scoring 16 teams going through to the Super Weekend contests taking place from Thursday to Saturday. The top scoring teams across all three Super Weekends will then go head-to-head in the four-day finals.

The PMPL competitors will be supported by four of the top PUBG MOBILE influencers from across the region – Alshamri, Silvatch, aeod1407, VenomPUBG - who will be cheering on their country’s teams and providing their own special sportscaster commentary for the final week of competition.

The 20 teams taking part in PMPL Arabia feature players from over 20 different countries, representing some of the best Esports talent in the region today.